Euro 2020 news: Gareth Southgate will be hoping Wembley factor boosts his side

Working from home pays off for England and Euro 2020 backers 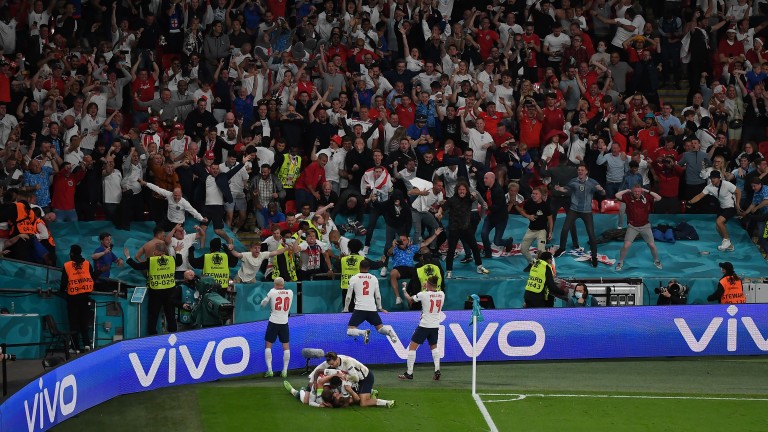 England have certainly made the most of playing the majority of their games at Wembley
Michael Regan - UEFA
1 of 1
By Chris Rivers UPDATED 5:24PM, JUL 10 2021

The return of crowds has been a joy to listen to for TV football viewers and their impact seems to have had a positive impact on results too.

Nine teams got the chance to perform on home soil at this unique European Championship and while the likes of Scotland and Denmark struggled to capitalise, a number took advantage, particularly the bigger footballing superpowers.

Of the 26 matches played by teams on their own patch, 13 ended with the host nation coming out on top.

Italy and the Netherlands proved to be the most successful of those teams who got to perform in front of their home fans, posting 100 per cent win rates.

With three wins from five matches inside 90 minutes, England backers have enjoyed a profitable return and they could, of course, improve that figure significantly if they triumph in Sunday’s final without the need for extra time and penalties at around 7-4.

Much has been made of the atmosphere at England games and the 12th man in the stands at Wembley had clearly been missed over the last domestic season.

The Premier League witnessed 144 home wins last season - a record low for a top-flight campaign  - while home victory rates barely topped 40 per cent in La Liga, the Bundesliga and Serie A as away sides made hay in empty stadia.

A rise to a 50 per cent win-rate for host nations at Euro 2020 marks a return to the beginning of the European Championships. Home sides enjoyed a 60 per cent win rate in the 1960s, but that has slowly tailed off to 41 per cent entering this tournament.

The improvements in travelling and accommodation have helped to narrow the gap between the hosts and their visitors, although England’s success at this tournament can partly be put down to something plenty of us have benefited from - the ability to work from home.

The Three Lions have travelled 898 air miles over the course of the Euros, the lowest of any side to reach the knockout stages. Final opponents Italy covered the third-fewest miles while Switzerland racked up 8,330 just to reach the quarter-finals.

However, those who followed home teams blind in this tournament would have lost money. A £10 level stake in the 90-minute match market in each of those games would have resulted in a £41 loss and punters would have been much better supporting the hosts to secure a win to nil.

Ten of those 13 home victories featured a shutout but there were some expensive failures along the way, including Germany at 2-11 against Hungary and 1-3 England against Scotland.