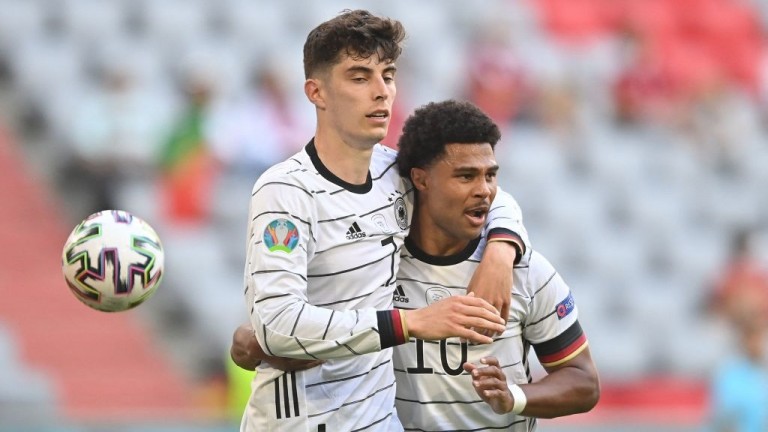 Germany delivered the perfect response to their doubters and proved they are very much alive and well in the group of death at Euro 2020 with a 4-2 hammering of holders Portugal.

Having started the day pointless and facing another group stage exit for the second major tournament running, the three-time European champions ended it have been made the second favourites to win Euro 2020 at 11-2 with bet365 after taking apart the Portuguese.

Two own goals from Ruben Dias and Raphael Guerreiro saw Germany go in at the break 2-1 ahead, Cristiano Ronaldo having given Portugal a surprise lead after 15 minutes.

The Germans continued to pour it on after half-time, Kai Havertz and Robin Gosens taking advantage of some chaotic Portuguese defending to put the home side 4-1 ahead before Diogo Jota netted a consolation for the beleaguered champions.

The win leaves Germany second in Group F, one point behind France after they were held to a 1-1 draw by Hungary.

The Germans face Hungary in their final group game on Wednesday and are 3-1 with bet365 to gazump the French by snatching top spot in the pool.

Meanwhile, Portugal must now get something from their game with world champions France to avoid seeing their title defence ended at the first hurdle.

Despite the prospect of an early exit, Ronaldo is now the 2-1 favourite to win the Golden Boot following his third goal of the tournament.

Earlier in the day, Euro 2020 favourites France let down their backers at a short price in Saturday's 1-1 stalemate with Hungary in Budapest.

Les Bleus dominated the first half at the Puskas Arena, where Kylian Mbappe, Karim Benzema and Antoine Griezmann missed good chances, before conceding a shock opener to Hungary left-back Attila Fiola just before the break.

The Magyars, 12-1 shots before kick-off, held on to their advantage and were favourites for the match in-play before Griezmann equalised for France in the 66th minute.

The world champions, 1-3 for victory at the start of the game, couldn't find a winner although their 1-0 win over Germany in Munich means the dropped points should not cost them a place in the last 16.

Didier Deschamps' side were eased slightly from 10-3 to 7-2 to lift the trophy before Portugal faced Germany in Saturday's second game in Group F.

France are 7-5 to beat European champions Portugal in their final group match in Budapest on Wednesday.

After scoring only two goals in their first two matches, one of them an own goal from Germany's Mats Hummels, France are 7-1 with bet365 to be the highest-scoring team at the finals. Mbappe is 16-1 to win the Golden Boot.

Spain are 10-11 to win Group E after they finished 1-1 with Poland in their second draw of the tournament.

Alvaro Morata gave them a first-half lead but Polish talisman Robert Lewandowski kept his country in the tournament with an equaliser shortly after the break.

Gerard Moreno missed a second-half penalty for Luis Enrique's side, who will need to beat Slovakia on Wednesday.

Sweden, who already have four points, are 5-4 to win the section and face the Poles in Saint Petersburg.