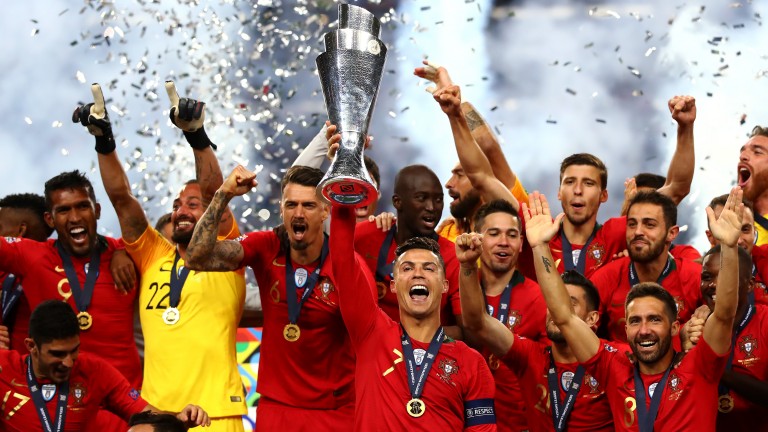 It seems bizarre that when Portugal won their first major trophy in the form of the European Championship in 2016, they did so without the services of Bruno Fernandes, Bernardo Silva, Joao Felix and Ruben Dias.

Indeed the Portugal team who lifted the Henri Delaunay Trophy five years ago were far less glamorous than the squad at the disposal of Fernando Santos today.

They failed to win any of their group matches at Euro 2016, managed only one victory inside 90 minutes during the knockout stages, and Santos built his side's success around pragmatic football and a sturdy rearguard.

But as the reigning European champions and winners of the inaugural Nations League two years ago, much is expected of Portugal in 2021.

Veteran Cristiano Ronaldo, now 36, is fresh from finishing as the top scorer in Serie A with 29 goals for Juventus and will feature in a record fifth European Championship this summer.

Behind him Portugal can boast one of the most exciting combinations of midfielders in the competition with Manchester United revelation Fernandes, Manchester City's slick winger Silva, €126 million forward Felix and Liverpool's Diogo Jota all pushing for starting spots.

And at the other end of the field centre-back Dias is fresh from an outstanding campaign in the Premier League and is likely to be partnered by Pepe or Jose Fonte, who captained Lille to the Ligue 1 title in the 2020-21 season.

That strength in depth should serve them well in the tournament's toughest group featuring France, Germany and Hungary, although the logistics of having to play in Budapest, then Munich and then Budapest again are far from ideal.

Qualifying was not as straightforward as it should have been - they finished second behind Ukraine in Group B - and they will not defend their Nations League title after failing to make the finals.

But this is a much stronger squad than the one who went all the way in France in 2016 and Portugal have every chance of becoming only the second side to win successive European Championship titles this year.

Manager - Fernando Santos: There is no doubting the credentials of 66-year-old Santos, who has managed Porto, Sporting Lisbon and Benfica and led his country to their first ever major trophy in 2016.

His side have been successful thanks to gritty and conservative football but the emergence of more creative talents such as Fernandes and Felix saw them adopt a more attacking style in the latest edition of the Nations League.

Prospects: Their Euro 2016 and Nation League triumphs show Portugal know how to box clever in knockout football and should they get out of a tricky group, they should be well-versed for the competition's latter stages.

Inside info - Manu Vieira, football journalist: Portugal will arrive at the Euro 2020 led by the ever-ambitious Cristiano Ronaldo. The feeling in the camp is one of confidence but being placed in Group F with Germany and France, makes them aware that dream can be cut short.

Rui Patricio should start in goal, the defence led by Pepe and Ruben Dias, while the likes of Joao Felix and Andre Silva will hope to follow Ronaldo's lead up front.

FIRST PUBLISHED 2:56PM, JUN 10 2021
As the reigning European champions and winners of the inaugural Nations League two years ago, much is expected of Portugal in 2021