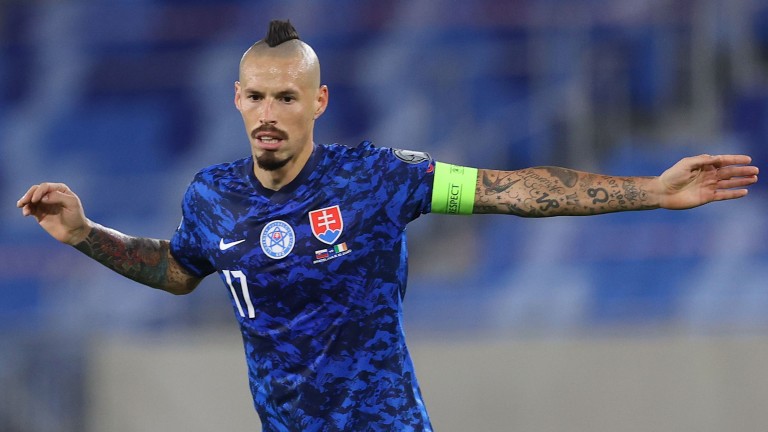 The dissolution of Czechoslovakia in 1993 has taken some adjusting to and this is just the third time from 13 attempts in which Slovakia have qualified for a major competition as an independent nation.

The Repre participated in the 2010 World Cup in South Africa and they were also involved at the last European Championship held in France, with both appearances resulting in eliminations at the last-16 stage.

Ultimately, Slovakia may struggle to hit those heights again, although they could have been faced with a more cut-throat section.

Slovakia relied on two tense playoff ties to book their finals ticket, upsetting Ireland in a dramatic shootout at home before outlasting Northern Ireland in extra-time at Windsor Park.

Just four weeks before their winner-takes-all clash in Belfast, Pavel Hapal was sacked and replaced in the dugout by Stefan Tarkovic, who was assistant to Jan Kozak in France five years ago.

Since sealing their finals spot, Slovakia have suffered relegation from the second tier of the Nations League and have been held to dismal draws by minnows Cyprus and Malta in World Cup qualifying, before regaining focus with a vital 2-1 victory over Russia.

The Slovaks are the lowest-ranked nation in Group E as they sit 32nd in Uefa's national team rankings, with only three sides - North Macedonia, Finland and Wales - rated inferior to them at this summer’s showpiece.

They have won only two of their last 11 competitive fixtures in regulation time and wily veteran Marek Hamsik, now plying his trade in Sweden with IFK Goteborg, is still relied upon heavily to sprinkle star quality.

There is a nice spine to the side with Newcastle number one Martin Dubravka, Inter’s title-winning centre-back Milan Skriniar and Napoli anchorman Stanislav Lobotka pulling the strings alongside Hamsik in midfield. But the lack of a recognised goalscorer is problematic.

Tarkovic may opt for more defensive-minded tactics, with them likely to target their opening two fixtures against Poland and Sweden in Saint Petersburg, instead of a curtain-closer with Group E heavyweights Spain, who will be buoyed by home support in Seville.

Manager - Stefan Tarkovic: Been involved with the national set-up since 2013, Jan Kozak’s former assistant Tarkovic was dragged in to deal with the damage done by Pavel Hapal in October and has favoured defensive tactics in his five-match reign.

Many felt Tarkovic’s appointment was a risky one, with short stints at a number of Slovakian clubs, featuring a five-month stay at MSK Zilina, his only real experience of senior management.

Prospects: There are certainly tougher sections of the draw Slovakia could have landed in but, even so, they have their work cut out to reach the knockout stages.

Slovakia look the weakest of the Group E quartet and, with goals an obvious concern, they may be resigned to bottom spot.

Inside info - Stano Sokolsky, journalist: Slovakia will once again be led by Marek Hamsik, who at 33 has spent last year with Swedish club IFK Gothenburg.

Defender Milan Skriniar could prove crucial and will be full of confidence, after lifting a Serie A trophy with Inter. Group E will be a difficult task, but Slovakia feel they can surprise the favourites and reach the knockout stages.