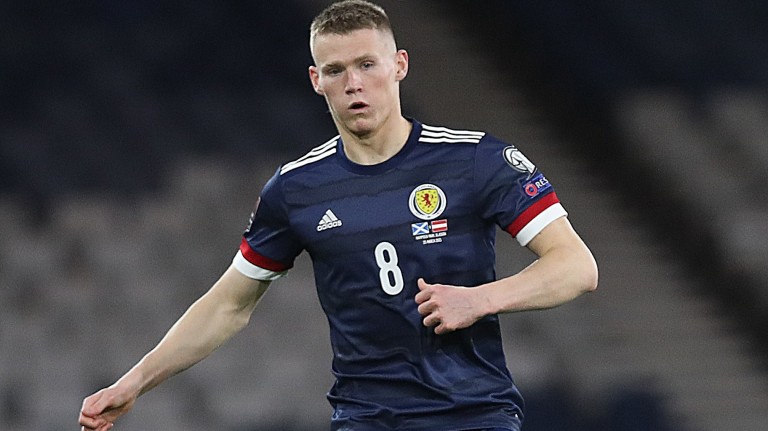 Scott McTominay is one of many Premier League stars involved in the Scotland squad
Ian MacNicol
1 of 1
By Dan Childs 6:40PM, JUN 14 2021

Scotland have had a miserable time since appearing at World Cup 1998 and are getting ready to compete in their first European Championships since 1996, when they were also drawn in the same section as England.

In just two previous appearances at European Championship finals, they have never got past the first round, although they took four points at Euro 96 and finished below defending champions Netherlands on goal scored.

Reaching the finals is an achievement in itself for the Scots, who won penalty shootouts in their playoff ties at home to Israel and away to Serbia.

They would love the chance to show off their spot-kick prowess in this summer's knockout stages and their chances of making an impact are increased by home advantage in their first and third games against Czech Republic and Croatia.

The Wembley encounter with England is the one that most Scottish fans will be looking forward to and it might be more of an even contest than the markets anticipate.

The nations crossed swords in 2018 World Cup qualifying, when England won 3-0 at Wembley before the points were shared in a 2-2 draw at Hampden Park.

And the Wembley defeat was more even than the final score suggests as the Scots won the shot count 12 to nine.

However, the key for Scotland to do well at Euro 2020 will be not to get too fixated on the England contest.

Their opener against the Czechs stands out as a game they dare not lose, paving the way for them to have at least something riding on the clash with Croatia.

Clarke played to Scotland's strengths in qualifying by settling on a three-man defensive line which minimises one of his teams weaknesses – a lack of quality wingers – and provides a framework to shoehorn talented left-backs Kieran Tierney and Andy Robertson into the same team.

Scotland's midfield is also a strong suit with Scott McTominay, John McGinn and Stuart Armstrong offering plenty of Premier League quality and experience, but there is a lack of firepower and one of the attackers will need to make a name for himself if the Scots are to avoid another group-stage exit.

Manager - Steve Clarke: Expectations were fairly low when the SFA turned to Clarke in May 2019 but he has done an excellent job by getting the very best from a group who arguably lack the quality of some of the squads who have fallen short over the last 20 years.

Prospects: Scotland demonstrated a strong mentality towards the end of qualification and could prove to be difficult opponents if they reach the knockout stages.

However, they have been drawn in a tough section and it is a strong possibility that they will bow out before the round of 16.

Inside info - Alan McInally, former Scotland striker: There is a huge wave of optimism ahead of the tournament and rightly so. We are at home to the Czechs first, hopefully in front of a crowd at Hampden, and I just can't wait for it to start because that game is a big opportunity.