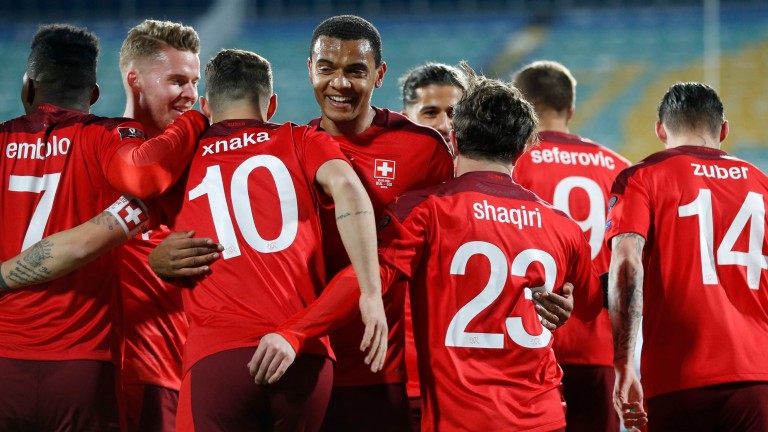 Five years after leaving Euro 2016 in the round of 16 without having lost a game and 15 years after being bundled out of the World Cup at the same stage without even conceding a goal, the Swiss are masters in the art of the honourable exit.

A nation with no great historical pedigree have become serial qualifiers – they've missed out on just one of the last eight major finals – and under impressive head coach Vladimir Petkovic they've trained on again.

The Bosnian not only took them to the last 16 last time but repeated the feat at the World Cup in Russia two years later.

Petkovic also led Switzerland to the inaugural Nations League finals, has kept them in the top tier of that event once again (though only thanks to being awarded a win over Ukraine), oversaw a more than adequate qualifying campaign in which they pipped Denmark for top spot and is two out of two on the road to next year's World Cup.

To take the next step, to try to get beyond round two and avoid another dignified demise, Petkovic is doing nothing radical, instead pinning his hopes on a group of players who have served him so well throughout his seven-year reign.

He has tweaked his tactics – a three-man rearguard tends to be the bedrock of his formation and has replaced the 4-2-3-1 set-up at the World Cup where they drew with Brazil and beat Serbia – but the names will be familiar.

Gladbach keeper Yann Sommer has been one of Europe's most accomplished and underrated glovesmiths for a while, Fabian Schar and Ricardo Rodriguez two of several seasoned defenders to pick from while skipper Granit Xhaka continues to anchor the midfield.

Xherdan Shaqiri is largely surplus to requirements at Anfield but anything but with Switzerland where he tends to play in the hole off a front two, one of whom will be Benfica's Haris Seferovic, who has enjoyed a prolific campaign in the Primeira Liga.

These names reek "reliable" – it's a spark from the likes of Ruben Vargas or the frustrating Breel Embolo which may determine if Switzerland could go deep.

Manager - Vladimir Petkovic: The meticulous Bosnian-Swiss has reached the last 16 of his two major finals in seven years at the helm, and is renowned as an astute tactician. Has switched from four to three (or five) at the back, a move which plays to their obvious strengths.

Prospects: Four times in major finals since 1994 they've got to the last 16 and no further and they will be written off accordingly because of that statistic. The draw's been kind to them, the schedule less so and it's the likely lack of goals which makes them hard to fancy as dark horses.

Inside info - Christian Xander, sports journalist: Led by Arsenal midfielder Granit Xhaka, much of the Switzerland squad is made up of players based in the German Bundesliga.

The Swiss feel they can get out of a group that also includes Italy, Turkey and Wales.

FIRST PUBLISHED 2:56PM, JUN 10 2021
Petkovic is doing nothing radical, instead pinning his hopes on a group of players who have served him so well throughout his seven-year reign