Euro 2020 firmly in the sights of Southgate's young lions

Future is bright for promising side 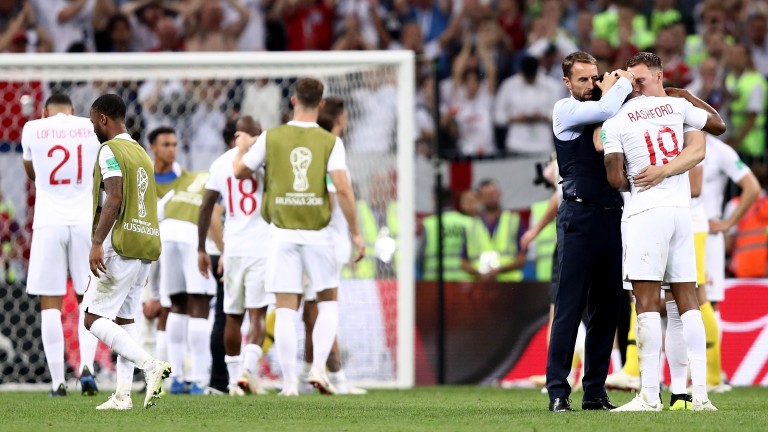 The one-off European Championship which is going around the continent - 12 cities from June 12 to July 12 - to celebrate its 60th year will be finishing with both semi-finals and the final at Wembley to theoretically give England a better chance of building on their unlikely run to this summer's World Cup last four.

Croatia broke English hearts in Moscow on Wednesday but after the pain came the belief that the land of hope can lead to glory with a young squad aiming to peak either at Euro 2020, or even the next World Cup in Qatar.

With England being the world champions at Under-17 and Under-20 level and only Gary Cahill, Ashley Young and Jamie Vardy in their thirties of the current crop, it would be something of a disappointment if this turns out to be as good as it gets for Gareth Southgate's side.

England are 10-1 to win Euro 2020, a price that highlights how expectations have risen again. They were 18-1 to lift the World Cup in Russia before a ball was kicked.

The foundations have been cemented for a bright future with 24-year-old goalkeeper Jordan Pickford justifying his selection and in front of him Kyle Walker, John Stones and Harry Maguire will presumably get time to work together as a back three having only started practicing in the 3-3-2-2 shape last November.

Joe Gomez may also be jostling for a position within Southgate's rearguard at the Euros, while his teenage Liverpool teammate Trent Alexander-Arnold looks sure to put pressure on wing-back Kieran Trippier, who was one of the stars of England's unlikely run.

Expect Fulham's fantastically talented left-sided Ryan Sessegnon to have broken into the England senior squad by the time 2020 comes around and a youthful midfield of 22-year-olds Dele Alli and Ruben Loftus-Cheek plus 24-year-old Eric Dier, 25-year-old Jesse Lingard and 28-year-olds Jordan Henderson and Fabian Delph will still be available with the added bonus of tournament experience under their belt.

Injured 24-year-old Alex Oxlade-Chamberlain would have been a near-certainty for Southgate's squad, so will need to come under consideration but England lost the midfield battle against Croatia and it ultimately cost them a spot in the World Cup final.

Finding a player to take on the mighty Luka Modric is difficult, yet getting a Michael Carrick-type who can control midfield may be the hardest problem for Southgate to solve in the next two years.

Bournemouth's Lewis Cook and Harry Winks of Tottenham are two with the potential to become that midfield dictator and much is expected of Manchester City's Phil Foden.

At some stage Foden will have to either start playing regularly for City, or leave in search of first-team football like his former teammate Jadon Sancho, now at Borussia Dortmund.

England fans have bemoaned a lack of creativity for some time, although Sancho has already shown, like Mason Mount, that he possesses it in bundles.

All Chelsea youngsters face a mountain to climb breaking into the first team but Mount looked classy on loan at Vitesse in the 2017-18 campaign and is begging for a crack at the Premier League.

History suggests he could be waiting for a while with Loftus-Cheek and Nathaniel Chalobah among those to have been frustrated by their lack of minutes at the Stamford Bridge club. Maybe things will be different following Chelsea's latest coaching change.

As for the forwards, captain Harry Kane is only 24 and set to be around for many tournaments to come and likewise 23-year-old Raheem Sterling and 20-year-old Marcus Rashford.

However, England have been in this position before, waiting for an opportunity for everything to fall into place and it never did for the previous golden generation between 2002 and 2006.

France's squad, for example, is nowhere near being over the hill and their talent pool appears even deeper than England's. A weakened Germany won the European Under-21 Championship last year and the dethroned world champions will be dtermined to launch a comeback, and we have not even mentioned Spain, Belgium, Italy, Portugal, Holland or World Cup finalists Croatia.

The simple fact is you have to take these chances when they come along and England failed on that score in Moscow, blowing a 1-0 half-time advantage.

In-play they were just 1-10 with bet365 to qualify for the final and 6-4 to win the World Cup. That was a scary prospect for bookmakers who had racked up hefty liabilities following a sustained patriotic punt.

"I don't take any pleasure in them going out but it would have been a £6m payout had they done the impossible" said Betfred boss Fred Done, while bet365's Steve Freeth added: "England started as our second-worst result but when the tournament cut up and the route became clear we started to see more money for them on the outright market.

"They would have been our biggest ante-post payout but in a World Cup full of ups and down, the good days for us have outweighed the bad."

Next up for England is the inaugural Nations League which runs through 2018-19 and the Three Lions, who are in a group with Spain and Croatia, are 12-1 shots.

The four group winners will advance to the semi-finals, although it is not yet clear how seriously the competition will be treated by managers as it replaces the much-maligned international friendlies.