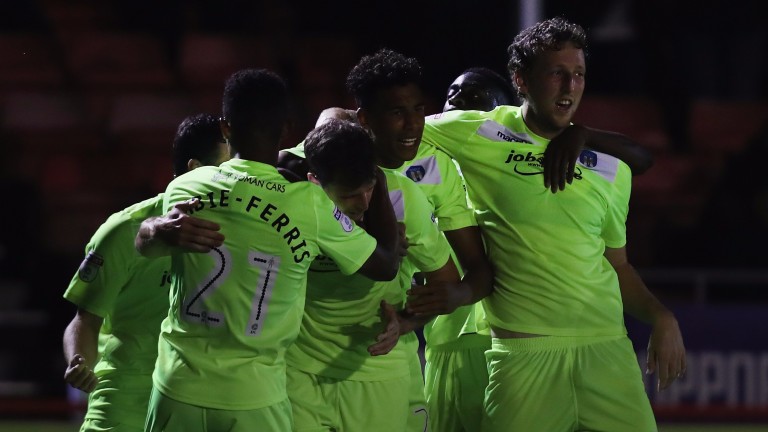 Colchester United could have plenty to celebrate at Stevenage
Bryn Lennon
1 of 1
8:02PM, DEC 30 2016

Colchester's record since they began using three centre-backs is played five, won four, drawn one, scored ten and conceded one and the Essex boys can continue to finish the year in style at Stevenage.

John McGreal's decision to ditch 4-3-3 was controversial because Colchester have made a big deal out of using the system throughout their youth teams all the way up to the first team and some supporters claimed the manager was being forced to stick to that formation.

However, something had to change following a run of 13 games without a victory. And it has, with excellent results, albeit the Sky Bet League Two fixture list has been kind in recent weeks with games against Cheltenham, Crewe, Mansfield and Notts County before Monday's fine 1-0 success at high-flying Luton.

United had been knocking on the door of a big away win even before the move to three centre-backs after being unlucky in narrow defeats at Plymouth and Doncaster.

The side is now settled - McGreal has selected the same starting 11 for five straight matches - and it's no surprise Owen Garvan's return to the team has coincided with the push up the table.

Defensive errors were blamed for Stevenage's 2-1 loss at home to Cambridge on Monday and afterwards manager Darren Sarll told the local Comet newspaper: "If we do better for the two goals we win the game."

But Stevenage keep giving up chances and their only clean sheet in 14 home games this season came against Southend's reserves in the Football League Trophy.

Newport v Exeter
Bookmakers are struggling to find a favourite at Rodney Parade but if there is to be a winner then Exeter look the more likely.

The visitors will have to deal with a number of factors outside of Newport's starting 11 with the playing surface arguably the worst in the Sky Bet Football League.

Portsmouth boss Paul Cook claimed earlier this week "you can't shut doors and the showers don't work", which is why he made sure his side didn't arrive at the ground until 50 minutes before kick off.

Pompey came away with a 3-2 success at rock-bottom County, who have lost their last five league matches and afterwards home manager Graham Westley opined he needed a new centre-back, central midfielder and striker to stand a chance of staying in the division.

Exeter have improved throughout the season, collecting a healthy 17 points from their last ten league matches and since the start of October their defeats have come against Wycombe (who started this round of matches sixth), Cambridge (seventh), Doncaster (first) and Carlisle (third).

The Grecians limited Yeovil had no shots on target in their 0-0 derby draw last time out and that sort of defensive discipline makes them worth a punt with money back if it ends in a draw.

Derby v Wigan
Warren Joyce's first match in charge of Wigan saw them concede twice at home inside five minutes to Reading and things have not improved that much since with four points in eight games.

Five straight defeats, the last two poor losses against Ipswich and Rotherham, has seen the fans turn on Joyce with his team selection, demeanour and even choice of touchline clothing getting abused.

Joyce needs a positive result but it is unlikely to come at Derby. The Rams have won eight of their last nine matches and have not conceded at home since September 24, a run of seven matches.

Langdon's plays of the day

BANKER
Derby 8-13
Pride Park visitors Wigan are on a shocking run and must deal with a stack of absentees so even with one day fewer to prepare for the game Steve McClaren's men should be closer to 1-2 for this clash.

BLOWOUT
Sheffield United 11-20
The Blades are well placed to go up this season but this match could be trickier than usual with the Chris Wilder factor in play. Northampton, 1-0 winners at a decent Oxford side last time out, would love to upset their former boss.

HOTSHOT
Christian Eriksen 7-1 bet365
Only Sergio Aguero and Zlatan Ibrahimovic are averaging more shots than the Spurs schemer who has scored five goals in his last six league matches and also hit the bar against Southampton.

THOUGHT FOR THE WEEK

Naby Keita (Leipzig)
The 21-year-old central midfielder with the energy of N'Golo Kante but better on the ball is nailed-on to move to a bigger club after a stunning breakthough year with the Bundesliga new boys.

Plucked from Istres in France to move to Salzburg before the transfer to Leipzig it is clear Red Bull's sporting director Ralf Rangnick knows what he is doing.

Franck Kessie (Atalanta)
Labelled the new Yaya Toure, Kessie is being linked with a transfer to Chelsea and it's easy to see why Antonio Conte is interested.

The Ivory Coast 20-year-old has scored six times for Atalanta this season (he takes their penalties) but there is much more to his play with a good all-round physical attributes which are suited to the modern game.

Bernardo Silva (Monaco)
Portugal would not have been anywhere near as boring at Euro 2016 had the twinkle-toed Silva not been ruled out through injury.

There are a lot of talented youngsters at Monaco but Silva, with an eye for a pass and an ability to drift past defenders, will soon be making super agent Jorge Mendes even richer.