Ertz looks set for another busy night with Eagles 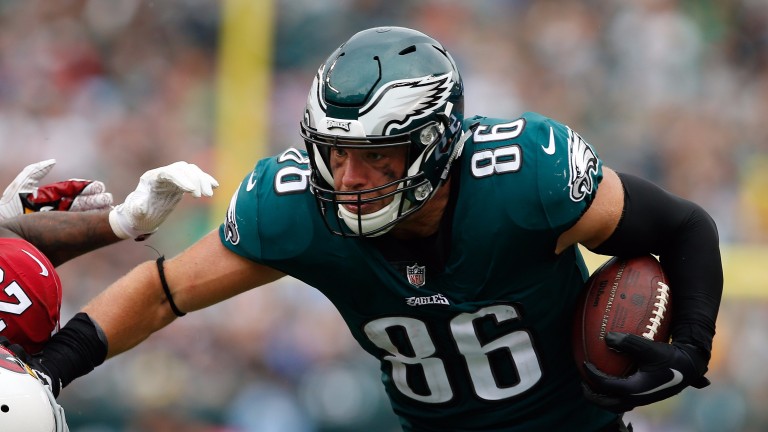 Dallas and the New York Giants have not made a huge impact on the NFC East this year so Philadelphia's Week One victory over Washington has given them a big advantage and that should make for an entertaining clash at Lincoln Financial Field.

The Eagles have suffered one defeat in their opening six outings and Washington (3-2) may live to rue the mistakes that contributed to their downfall in their 30-17 defeat in opening week.

With that result in the background, the prizes are there for both teams to make a positive approach to the rematch.

If Philly can gain another success, they could have a stranglehold on the division, while Washington will be right back in the hunt if they can leave Pennsylvania with a win.

The visitors have shown they have the offensive ability to give any team a run for their money and Jay Gruden's side should be encouraged that they have scored at least 26 points in three of their last four matches - the exception was against a mean Kansas City defence.

They go into their latest battle, however, with kicker Nick Rose, who has never played in the NFL before, so there is a big responsibility on his shoulders.

Philadelphia's Carson Wentz has grown into the role in his second season and he should shine as the Eagles look to take a grip on affairs in the East.

It could be a night for tight end Zach Ertz to play a key role. He has become one of Wentz's go-to options and with 32 receptions in his last four matches against Washington, it seems realistic to expect him to have another busy night.

Washington
The game is likely to come too early for cornerback Josh Norman who is back in practice after sustaining a broken rib, but defensive tackle Jonathan Allen has been ruled out for at least the next eight weeks with a foot injury.

Philadelphia
The Eagles will hope cornerback Ronald Darby will be available after an ankle injury. Linebacker Jordan Hicks has been struggling with a calf problem while offensive tackle Lane Johnson has recovered from concussion.