But big-hitting Miller is threat for SA 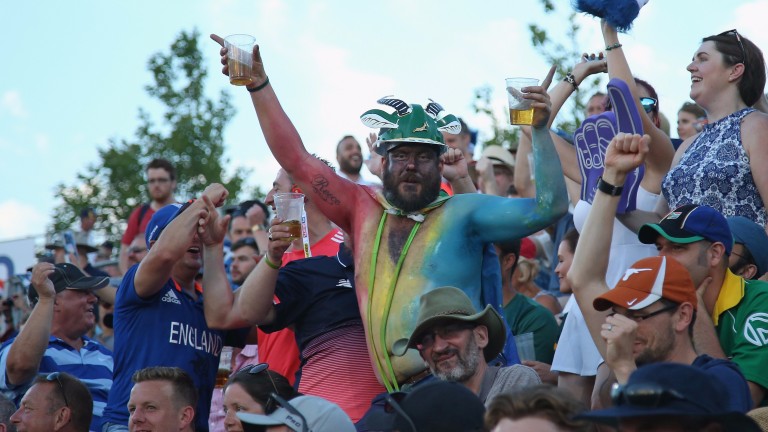 One South Africa fan keeps his spirits up during England's victory at the Rose Bowl
Steve Bardens
1 of 1
By James Milton 8:00PM, JUN 22 2017

Having lost the one-day series against England 2-1, the tourists were bundled out of the Champions Trophy at the group stage before a nine-wicket tonking at the Rose Bowl in the first of three 20-over matches.

They made a horrible start, as England's opening bowlers David Willey and Mark Wood each took a wicket with their first ball, and the South African struggle was epitomised by skipper AB de Villiers.

England's inexperienced spinners Liam Dawson and Mason Crane took full advantage of the Proteas' dented confidence to tie them down in the middle overs and the lusty hitting of Jason Roy, Alex Hales and Jonny Bairstow made the run-chase a doddle.

A trip to Taunton usually provides a tonic for in-form batsmen and South Africa can't afford another pedestrian batting performance.

Best bets
De Villiers conjured up a couple of eye-catching sixes late in his innings but at the prices David Miller makes more appeal to be South Africa's top runscorer.

He struck the second ball he faced at the Rose Bowl for a sweet six over long-off before being undone by the pace of Wood, who won't feature at Taunton.

Miller has looked in better touch than many of his teammates on this tour, with unbeaten scores of 71 against England in the second ODI and 75 against Champions Trophy winners Pakistan.

Few grounds are big enough for the left-hander when he gets going and he could do some serious damage at batsman-friendly Taunton.

Willey and Wood shared the wickets at the Rose Bowl, where Hampshire duo Crane and Dawson took most of the plaudits, but Chris Jordan finished the innings well for England.

Jordan bowled the 18th and 20th overs, conceding just 15 runs, and he has produced some outstanding Twenty20 figures since the start of last year, taking 3-23 against South Africa, 4-28 and 3-29 against Sri Lanka, and 3-22 off four overs against India in Nagpur in February.

Venue
Taunton hasn't hosted an international match since the 1999 World Cup, when India's Sourav Ganguly and Rahul Dravid shared a stand of 318 in the win over Sri Lanka.

The County Ground remains a cracking place to bat - Somerset fell just 24 runs short of Nottinghamshire's 429-9 in last week's One-Day Cup semi-final and the hosts chased down targets of 179, 187 and 168 during the 2016 T20 Blast.

Team news
Wood is rested, with Somerset's Craig Overton joining the squad, and Bairstow, man of the match on Wednesday, is available for Taunton but not for Sunday's game in Cardiff.

With no Hashim Amla, Quinton de Kock, Faf du Plessis or JP Duminy in the squad, openers Reeza Hendriks and JJ Smuts should get the chance to make up for their failures at the Rose Bowl.