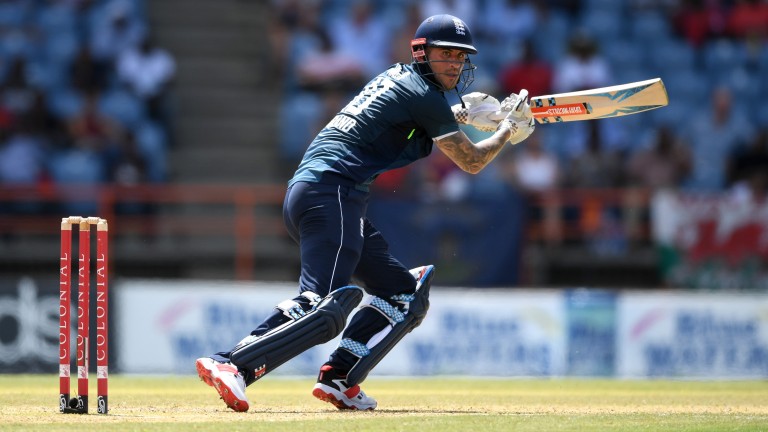 Alex Hales's most recent ODI appearance came against the West Indies in February
Gareth Copley
1 of 1
By James Milton UPDATED 2:35PM, MAY 12 2019

World Cup favourites England have dropped Alex Hales after the Nottinghamshire batsman was given a 21-day ban for recreational drug use.

Hales is currently serving the suspension, so would have been available for the start of the tournament on May 30, but the ECB have decided to leave him out in the interest of "creating the right environment within the team and ensuring that there are no unnecessary distractions".

Jason Roy and Jonny Bairstow have cemented their positions as England's preferred one-day openers in the last year but Hales remained a key member of the squad.

England are 9-4 to win the World Cup on home soil but their preparations have been far from smooth.

Roy has struggled with a hamstring injury and back spasms in recent weeks while Kent's Sam Billings, not named in the original 15-man squad but a talented option to have in reserve, is sidelined with a long-term shoulder problem.

Hampshire's James Vince seems to be timing his run for selection as sweetly as he does his trademark cover drives.

The right-hander has played only six ODIs for England, with a top score of 51, but he started this summer's One-Day Cup campaign with knocks of 56, 95, 14, a career-best 190 against Gloucestershire, and 47.

Sky Bet rate Joe Root 5-2 favourite to be England's top runscorer in the World Cup. Bairstow, fresh from an impressive debut season in the Indian Premier League, is 7-2 with Roy 4-1, Jos Buttler 9-2 and captain Eoin Morgan 11-2.

Morgan will lead England against Ireland, the country of his birth, in Friday's ODI in Dublin. Ireland are 15-2 to upset the 1-12 visitors, who are expected to give an international debut to highly-rated Sussex all-rounder Jofra Archer.