World Cup favourites should make a fast start at The Oval 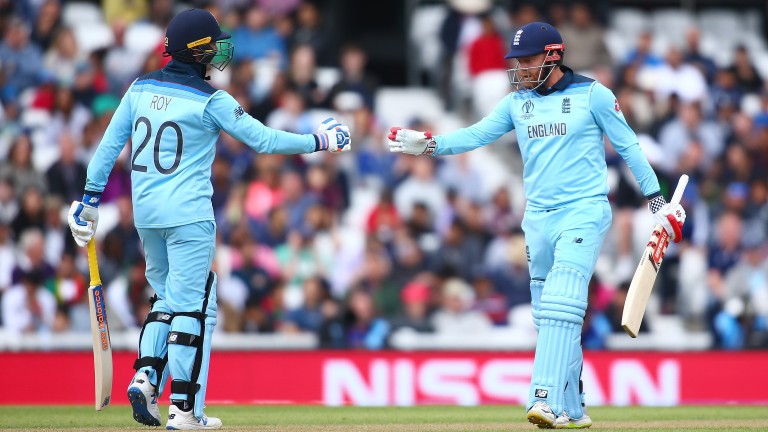 Jonny Bairstow and Jason Roy can impress at the top of the order for England
Jordan Mansfield
1 of 1
By James Milton 8:00PM, MAY 29 2019

Punters have been piling into England to win the World Cup but the 2-1 tournament favourites face a stiff opening examination against South Africa at The Oval.

Eliminated at the group stage of the 2015 World Cup, England have been transformed under the captaincy of Eoin Morgan and their power-packed batting displays have propelled them to the number-one spot in the ICC’s one-day rankings.

Formidable England openers Jason Roy and Jonny Bairstow take on a South Africa new-ball attack led by Kagiso Rabada and Lungi Ngidi and the Proteas are 19-10 to upset the hosts in south London.

But England’s batting depth is one of their main strengths in 50-over cricket, allowing Roy and Bairstow to blaze away in the Powerplay overs, knowing that Joe Root, Morgan, Ben Stokes, Jos Buttler, Moeen Ali and an array of competent lower-order batsmen are still in the hutch.

South Africa’s batting is less explosive, particularly after the retirement of AB de Villiers, and England should be confident of overpowering their first opponents on a true Oval pitch.

England won their final warm-up game against Afghanistan on Monday with 32.3 overs to spare as Roy smashed 89 not out off just 46 balls at his home ground.

England were 76-0 after just seven overs before Bairstow was stumped for 39 and, while the Proteas’ bowlers represent a major step up in class, England’s Powerplay approach is unlikely to change.

They are a solid bet at 8-13 to post the higher score in the first ten overs given the confidence of Roy, whose five ODI appearances this year have yielded scores of 123, two, 87, 76 and 114, and the free-scoring Bairstow.

De Kock can be a devastating hitter but he may temper his natural aggression, partly out of respect for Woakes and Archer and partly because South Africa lack England’s depth of batting talent.

Keeping wickets in hand is more important for the Proteas and Faf du Plessis looks the value to top-score in an anchor role for the underdogs.

This year Du Plessis made 427 runs in nine innings against Pakistan and Sri Lanka and the 4-1 about him top-scoring for South Africa is a tempting price, especially if England get rid of the dangerous De Kock early.

Roy, Bairstow and Buttler are 10-1 co-favourites to be man of the match while the exciting Barbados-born paceman Archer is 20-1 to bag the award in only his fourth ODI for England.

England
Mark Wood has been given the all-clear after scans on his ankle while Chris Woakes, Liam Dawson and skipper Morgan should be available after minor injuries.

South Africa
Dale Steyn’s shoulder injury could keep him out of at least the first two games.

England have won six of last their seven ODIs at The Oval, coming up 13 runs short of a target of 379 against New Zealand in 2015.

There were 29 sixes struck in that clash with the Kiwis and a good batting surface is expected although South Africa collapsed from 116-1 to 191 all out at the venue against India in the 2017 Champions Trophy.

Cloudy with sunny intervals and highs of 23C.