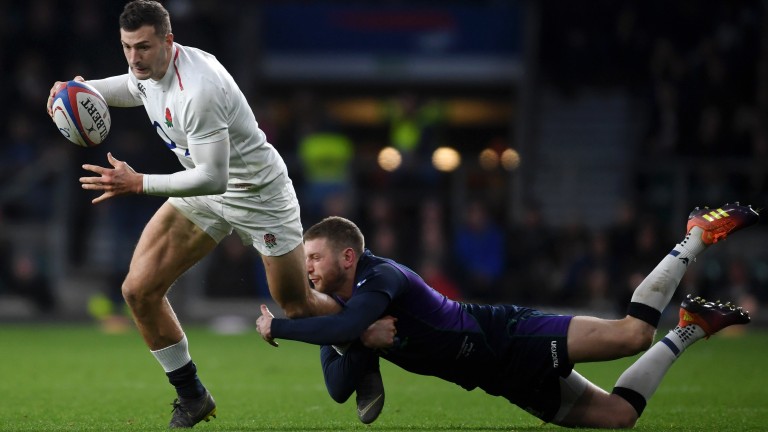 Scotland know they cannot allow England to get on the scoreboard early
Mike Hewitt
1 of 1
By Graham Woods UPDATED 9:21PM, FEB 5 2021

It's the oldest international in rugby history but even after 150 years the Calcutta Cup showdown between England and Scotland keeps throwing up surprises.

Four years ago Scotland were humbled 61-21 at Twickenham but back in Edinburgh 12 months later they stunned Eddie Jones's side 25-12, their first victory over the auld enemy for a decade.

On Scotland's last visit to Twickenham in 2019 they found themselves 31-0 down after barely half an hour and pulled off an unlikely 38-38 draw. England gained their revenge at Murrayfield last year with a 13-7 grind in wet and wild conditions.

So although England almost always go off strong favourites, giving up a double-figure handicap in every Six Nations encounter at Twickenham, the message from past meetings is to take nothing for granted.

Scotland's players have made it clear that they know what they mustn't do - allow England to get at them early. On their last two visits to Twickenham they have shipped a try inside two minutes ago, and the time before that in 2015 it was four minutes.

So expect early strong resistance from a Scotland side who looked far more dogged and up for a scrap last year. They lost their first two Six Nations games, but each time by seven points, and that was the margin again when they faced France in the Autumn Nations Cup.

Away form has long been a concern for the Scots but a 14-10 victory in Wales was another indicator of a team prepared to dig in and fight.

The handicap is set at 15 points, a line Scotland have covered the last four times the line has been set at that mark or higher, but a better bet could be that the visitors are within seven points at half-time.

England were quickly into their stride in all their Autumn Nations Cup games but in the final against France they were behind for most of the game and they may struggle to find early cohesion.

Given the disruptions to the domestic and European schedules it would be no surprise to see a lack of fluency and some scrappy play early on, the more so given that the five Saracens players in England's starting line-up have not seen any competitive action this season.

One area of strength for England, though, is their bench. Luke Cowan-Dickie scored the try that took the Autumn Nations Cup final to extra time and fellow forwards Beno Obano, Courtney Lawes and Ben Earls are true impact players while Bristol's Max Malins will also provide X-factor in the backline.

They can help England pull away in the later stages, and a winning margin of between 11 and 20 points looks the best bet.