Wembley friendly may be more entertaining than odds suggest 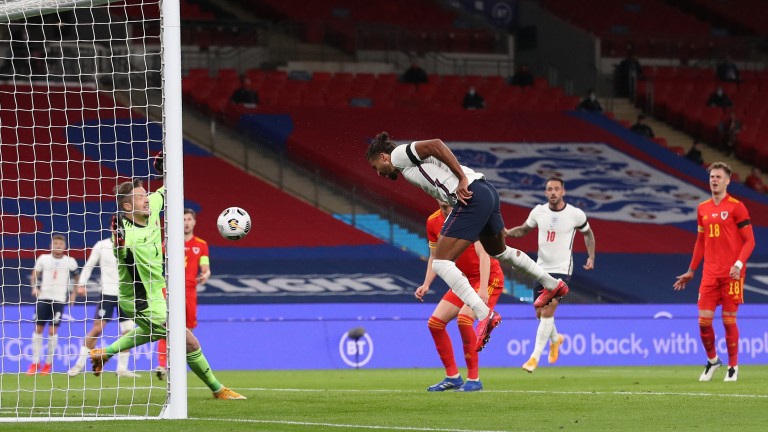 England
Borussia Dortmund youngster Jude Bellingham has been called up after James Ward-Prowse's withdrawal. Harry Maguire and Reece James are available before their suspensions start against Belgium on Sunday. Danny Ings is injured.

Ireland
David McGoldrick has retired from international football but captain Seamus Coleman returns to the squad after injury and Luton striker James Collins has been recalled.

England kicked off October's set of international fixtures with a convincing 3-0 friendly win over Wales and bookmakers expect more of the same when they take on Ireland at Wembley.

Gareth Southgate's men followed up the victory over the Welsh by beating Belgium, number one in the Fifa rankings, 2-1 before their bubble was burst by a disappointing 1-0 home defeat to Denmark.

Harry Maguire was sent off in the first half against the Danes while Chelsea youngster Reece James saw red after the final whistle and Southgate will demand a more professional performance in the friendly against Ireland.

Stephen Kenny's men had little to celebrate during three October internationals in which they laboured for 300 minutes without a goal.

Their hopes of qualifying for Euro 2020 were ended by a penalty-shootout defeat in Slovakia before forgettable Nations League clashes with Wales (0-0) and Finland (0-1).

Those results mean Ireland's last 14 competitive matches have all featured under 2.5 goals but Kenny's men played with a little more attacking enterprise than the bare scorelines suggest.

They had more attempts on goal than all three of October's opponents, winning the shot count 13-12 in Slovakia, 11-7 against Wales (despite ending the game with ten men) and 10-7 against a Finland side with an excellent home record.

Preston's Alan Browne and Aston Villa's Conor Hourihane missed great chances in the playoff stalemate against Slovakia and Ireland's recent friendlies have been less dour than their competitive fixtures.

They won 3-1 against both Bulgaria and New Zealand last year and, while a trip to World Cup semi-finalists England is a step up in class, they could contribute to an entertaining contest.

Southgate will want a positive response to the Denmark defeat last time out and he has named a squad bristling with attacking talent including established stars Harry Kane, Raheem Sterling and Marcus Rashford as well as the in-form Dominic Calvert-Lewin and Jack Grealish.

There are more doubts over the England defence with Maguire and Everton goalkeeper Jordan Pickford in patchy form this season so backing over 2.5 goals could be the way to go.

Four of the last eight goals scored in England internationals have been penalties.