Mushfiqur Rahim may prove a thorn in England's side once again 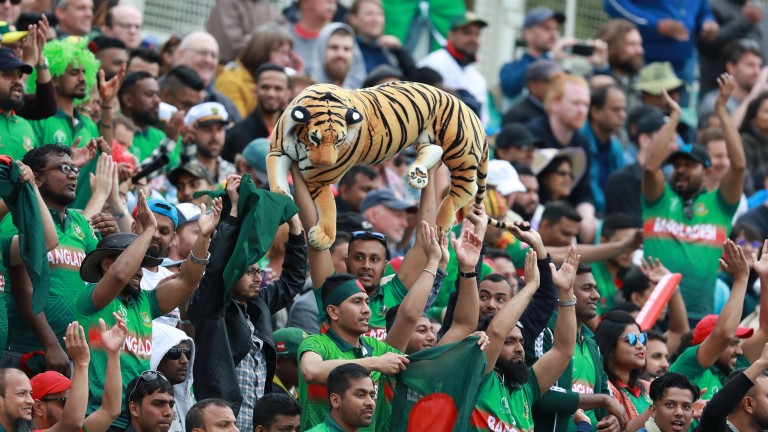 Bangladesh fans have enjoyed the Tigers' solid start to the World Cup
David Rogers
1 of 1
By James Milton 8:00PM, JUN 7 2019

Sophia Gardens, Cardiff
England's defeat to Bangladesh sealed their group-stage exit at the 2015 World Cup so there should be no complacency when Eoin Morgan’s trophy favourites tackle the 5-1 Tigers in Cardiff.

After a smooth opening victory over South Africa, England suffered a surprise loss to Pakistan at Trent Bridge despite centuries from Joe Root and Jos Buttler.

They remain 2-1 favourites to claim their first World Cup title but Bangladesh have played some fine one-day cricket recently, winning the Tri-Series against Ireland and the West Indies before a victory over the Proteas and a spirited defeat to New Zealand.

England are 1-7 to take the points and skipper Morgan will demand a more focused display in the field than they gave in the loss to Pakistan.

But Bangladesh’s top order also looks in good shape with openers Tamim Iqbal and Soumya Sarkar capable of fast starts in the Powerplay overs and all-rounder Shakib Al Hasan scoring 75 against the Proteas and 64 in the defeat to New Zealand.

Shakib and Mushfiqur Rahim were building a decent stand against the Kiwis at The Oval before a misunderstanding between the experienced pair ended with Mushfiqur being run out for 19.

That was a rare blot on the wicketkeeper’s recent record and he may feel he owes his side a performance after fluffing a simple chance to run out Kane Williamson in the New Zealand reply.

The Mighty Atom has been a model of consistency with the bat since arriving in Ireland for May’s Tri-Series and he should be backed to score at least 27 at a venue where he made 90 in a warm-up game against India.

Mushfiqur passed that mark in all four Tri-Series innings against Ireland and the West Indies and he made an excellent 78 from 80 deliveries in the 21-run victory over South Africa.

England are well aware of Mushfiqur’s threat with the bat but young Tigers paceman Mohammad Saifuddin is more of an unknown quantity.

The 22-year-old has only 15 ODI caps but hasn’t looked overawed by the occasion in his first two World Cup games, claiming 2-57 against South Africa and 2-41 against New Zealand.

Saifuddin bowled Virat Kohli in the warm-up game against India in Cardiff so clearly has the capacity to unsettle the world’s very best batsmen.

Odds of 11-2 about him being Bangladesh’s leading wicket-taker look too big, especially as he has been bowling late in the innings when batsmen are forced to go on the attack.

Team news
England
Liam Plunkett could return to the 11 with Adil Rashid possibly making way if England opt for a pace-heavy bowling attack.

Bangladesh
The Tigers could named an unchanged 11 after their solid start but batsman Sabbir Rahman is waiting in the wings.

Venue
England racked up 342-8 in their 2018 win over Australia in Cardiff but Sri Lanka were bowled out for 136 by New Zealand last week before winning a low-scoring game against Afghanistan.

Bangladesh have won both of their ODIs at the venue, shocking Australia in 2005 and beating New Zealand in the Champions Trophy two years ago thanks to centuries from Shakib Al Hasan and Mahmudullah.

Weather
It’s been a wet couple of days in Cardiff but the rain should clear in time for the start of the game. Sunny intervals, 15C.