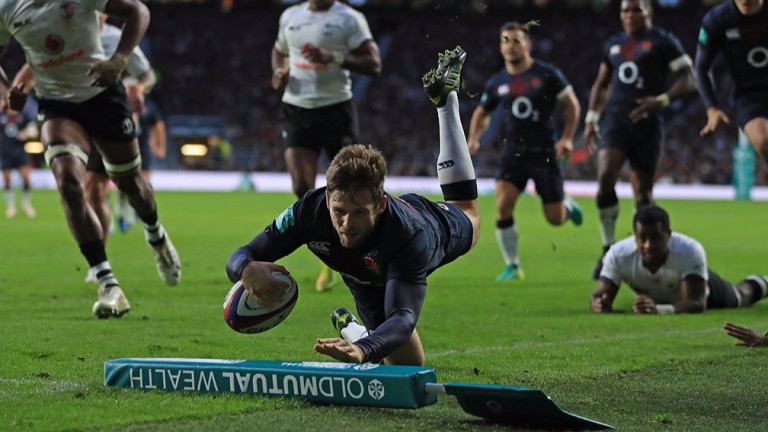 Elliot Daly was excellent on his first England start against Fiji last Saturday
1 of 1
By Graham Woods 8:36PM, NOV 25 2016

It’s fair to say England haven’t been tested too severely in their victories over South Africa and Fiji this autumn, and Saturday’s opponents Argentina may struggle to put up the kind of battling performance they have become renowned for at Twickenham.

This is the Pumas’ 12th and final Test in the last six months.They have managed three wins in that spell – and none in the last six – and in narrow defeats to Wales and Scotland in the last fortnight they have looked generally fatigued and lacking in attacking spark.

They have shuffled their half-backs, with the creative and experienced Juan Martin Hernandez moving from centre to fly-half and Tomas Cubelli replacing scrum-half Martin Landajo,the one player who stood out against Scotland last week. They also start without their most powerful ball-carrier Facundo Isa, who is among the replacements.

England blew Fiji away with a nine-try salvo last week, the first five without reply in the opening 30 minutes.

Argentina should be more resilient – they conceded two tries to Wales and just one to Scotland last week, none of those in the first half – but a handicap of 18 points gives an idea of what is expected of the England backline.

If England are smart they will use the pace and footwork of their backs to keep the flagging Pumas moving. Winger Jonny May, who has the best of both attributes, is odds-on to score a try but Elliot Daly looks value at 7-5 to cross. The Wasps man scored in his first start for England against Fiji last week and proved eager to come off his wing and look for the ball.

The match handicap is hard to call as Argentina have shown they are tough to break down but this England backline are a step up from what they have faced, and the home side should pull clear by the end.