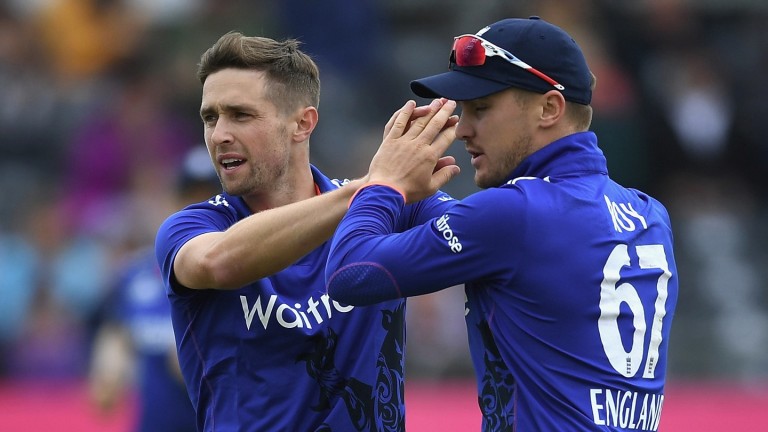 Chris Woakes and Jason Roy have impressed for England's one-day side in India
Gareth Copley
1 of 1
By James Milton 6:57PM, JAN 20 2017

The India-England ODI series has highlighted the evolution of 50-over cricket with the tourists trailing 2-0 despite scoring 350-7 and 366-8.

England’s new-ball bowlers have produced the goods too, reducing the hosts to 63-4 in Pune and 25-3 in Cuttack, but some superlative performances from India’s middle-order batsmen mean tomorrow’s third ODI in Kolkata is a dead rubber.

That shouldn’t dampen the spirits of the Eden Gardens crowd, or viewers of Sky’s coverage, as these aggressive, evenly-matched sides may well produce another thrilling encounter.

England, missing injured opener Alex Hales, are 7-4 to claim a consolation win but their top-order batsmen must show more ruthlessness.

In a series of fine margins, India’s batsmen have played the decisive innings with Virat Kohli (122) and Kedar Jadhav (120) powering the run-chase in the first ODI and wily old hands Yuvraj Singh (150) and MS Dhoni (134) causing carnage in Cuttack.

England, in contrast, have had six batsmen dismissed between 54 and 82 in the first two ODIs with only captain Eoin Morgan reaching three figures.

The middle overs of the innings have posed a problem for England with no bowler managing the kind of control shown by India’s Ravindra Jadeja, whose series figures of 2-95 from 20 overs are outstanding given the dominance of bat over ball.

Worryingly for bowlers, the last ODI at Eden Gardens featured a world-record innings of 264 from India opener Rohit Sharma’s against Sri Lanka in 2014 and big hitters could be tempted by bet365’s 8-13 that a century is scored in the match.

Rohit’s record probably won’t be on the mind of England opener Jason Roy but he has been timing the ball as sweetly as any player in the series, scoring 73 off 61 balls in Pune and 82 off 73 in Cuttack.

He was dismissed by the excellent Jadeja in both games but his fine form against India’s quick bowlers suggests the 4-1 about him top-scoring for England is a good bet.

Chris Woakes has the second-best economy rate in the series, behind Jadeja, and he was able to convert that pressure into wickets in Cuttack.

Woakes took 4-60 in Thursday’s game, mixing up his line and length nicely and dismissing the top four batsmen in the India line-up.

In his last 19 ODIs he has picked up three or more wickets in an innings six times and looks as likely as any England bowler to hurt the hosts in Kolkata.

Australia lead 2-1 after three ODIs against Pakistan and senior batsmen David Warner and Steve Smith should ensure they seal the five-match series in Sydney.

Injuries have disrupted both teams’ rhythm in the series, with Pakistan captain Azhar Ali and Australia pair Mitchell Marsh and Chris Lynn among those missing at the SCG.

But home skipper Smith has cut an unflustered figure, responding to his duck in the first ODI by top-scoring with 60 in Melbourne and an unbeaten century in Perth last time out.

The number three should relish a return to the SCG, where he scored a career-best 164 against New Zealand in December and a high-class 105 in the World Cup semi-final win over India in 2015.

Smith was man of the match that day and Betway’s 15-2 that he earns the award again is a tempting price.

But 7-1 shot Warner also merits a bet in the market at a ground where he reached a century before lunch on day one of the Test match against Pakistan earlier this month.

The dynamic opener hasn’t made a big score in the first three games but he looked in outstanding touch during the Test series.