England in good shape to hand Proteas another series beating 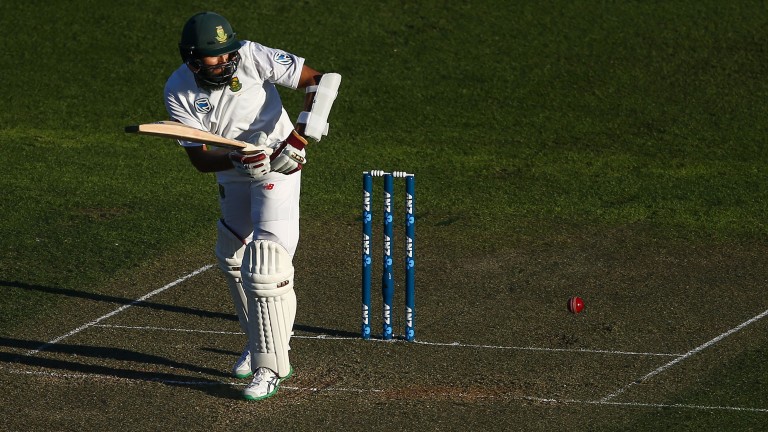 England claimed an impressive series victory in South Africa in January 2016 and they are 8-13 to repeat the feat at home in Joe Root's first assignment as Test captain.

The ICC rankings suggest Root's men are facing a tough test. England are fourth, two places below the Proteas, who have won their last four series including a 2-1 triumph in Australia last November.

However, South Africa start the series at Lord's with a stand-in captain - Dean Elgar deputises for Faf du Plessis, who is still at home after the birth of his child - and with major doubts over their batting strength.

AB de Villiers has made himself unavailable for Test cricket and the absence of Du Plessis leaves the tourists with a soft-looking middle-order.

JP Duminy and Temba Bavuma have modest Test records while Theunis de Bruyn has played only one Test and debutant Heino Kuhn is set to partner Elgar at the top of the order.

The 33-year-old Kuhn should face an England attack with James Anderson and Stuart Broad fit after niggles, and the return of Mark Wood to Test action is an exciting prospect for home fans.

If England's bowlers start the series well then the pressure will mount on South Africa's batsmen and a small bet on the hosts giving up a 1.5-Test start on bet365's handicap is advised.

Ben Stokes and spinning all-rounders Moeen Ali and Liam Dawson offer excellent balance to the home 11, easing the burden on the top-order batsmen.

Alastair Cook should be feeling at ease with himself after handing over captaincy duty to Root and the opener has certainly enjoyed his county stint with Essex, scoring three centuries in ten Championship innings.

Cook and Root are joint-favourites to be England's leading runscorer but Hashim Amla is a clear market leader for South Africa.

Amla has played 103 Tests - the other South Africa batsmen available for Lord's have 120 caps between them - and his class and experience of English conditions make him a worthy favourites.

Despite resigning as captain midway through the 2015-16 home series against England, Amla still scored 470 runs in four matches, and he warmed up for the first Test with an unbeaten 91 against England Lions at Worcester.

Kagiso Rabada made an instant impression on England's batsmen, picking up 22 wickets in three Tests when the sides last met, and the young paceman can further enhance his reputation in this series.

He struck four times in his first three overs of May's ODI against England at Lord's and looks a solid bet to be South Africa's leading wicket-taker, especially as more experienced teammates Vernon Philander and Morne Morkel aren't guaranteed to play all four matches.