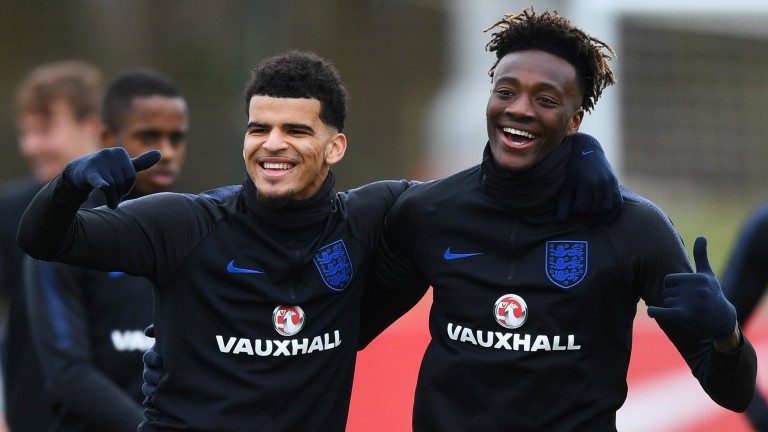 Dominic Solanke and Tammy Abraham could enjoy themselves against Romania
Gareth Copley
1 of 1
By Dan Childs 7:44PM, MAR 23 2018

England's Under-21s warm up for next Tuesday's important European Championship qualifier a home to Ukraine by hosting Romania at Molineux and they should get a confidence-boosting victory.

Young Lions head coach Aidy Boothroyd has named a 26-man squad for the two games and is likely to hand an Under-21 debut to Fulham's teenage sensation Ryan Sessegnon, who has been touted as a possible pick for the senior squad at the 2018 World Cup.

Sessegnon has been outstanding in the Sky Bet Championship this season, scoring 14 goals in 38 league appearances, and will be eager to catch the eye of senior manager Gareth Southgate, who has often promoted players from the Under-21 set-up.

The 17-year-old is just 13-10 to get on the scoresheet and his eye for goal will be a handy addition to a group lacking star quality in attack.

Dominic Solanke and Tammy Abraham are England's joint-top scorers in European Championship Qualifying Group Four with two goals each but neither have been regular starters in the Premier League this season.

Romania are top of Group Eight with three wins and three draws from six games but the absence of key players could harm their chances of springing a surprise.

Regular goalkeeper Ionut Radu has had to withdraw from the squad with an injury and striker George Puscas, their top scorer in qualifying with four goals, did not make the original selection.

The omissions of Radu and Puscas leave them weaker in two crucial areas and should make life much easier for England, who are worth backing to be in front at half-time and full-time.

Team news
England
Ryan Sessegnon is called up for the first time but Harry Winks (ankle) has withdrawn from the squad. Liverpool's Trent Alexander-Arnold is in the squad after training with the senior side this week.

Romania
Goalkeeper Ionut Radu picked up an injury and has had to withdraw from the squad.

Key stat
England have been ahead at half-time and full-time in three of their last four matches.