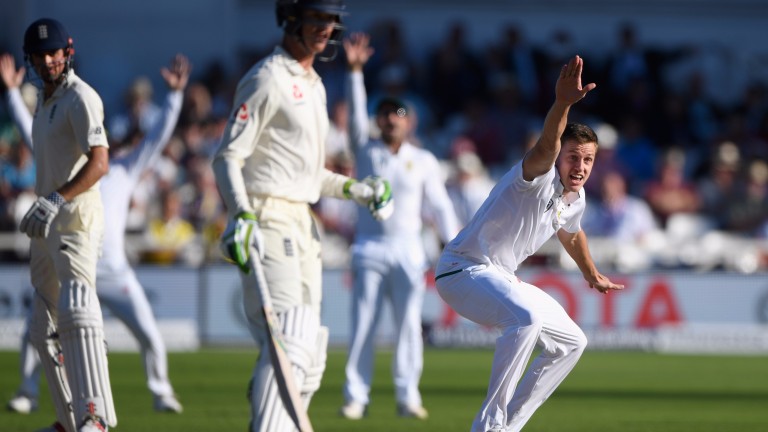 Morne Morkel appeals for the wicket of Alastair Cook, which is overturned on review
Getty Images
1 of 1
By Max Oram 8:45PM, JUL 16 2017

South Africa are 1-7 to win the second Test at Trent Bridge and level the four-Test series with England after declaring on 343-9 shortly before stumps on day three to set their hosts 474 for victory.

Three Lions openers Alastair Cook and Keaton Jennings survived four testing overs from Morne Morkel and Vernon Philander and begin again on 1-0 Monday morning but Joe Root’s men are 7-1 to set a new record for the highest succesful chase, which currently stands at 418-7 by West Indies against Australia in 2013.

Two largely warm and sunny days are forecast and 180 overs is plenty of time but England are such a big price because the Nottingham pitch is showing signs of wear and tear.

Ben Stokes and James Anderson got reverse swing just before lunch after a serene morning for the Proteas. Then Stokes trapped visiting captain Faf du Plessis with one of a number of deliveries from quicker bowlers that kept low. After tea, spinners Moeen Ali and Liam Dawson found clear turn.