Hosts Russia to face Croatia in quarter-finals after shootout successes 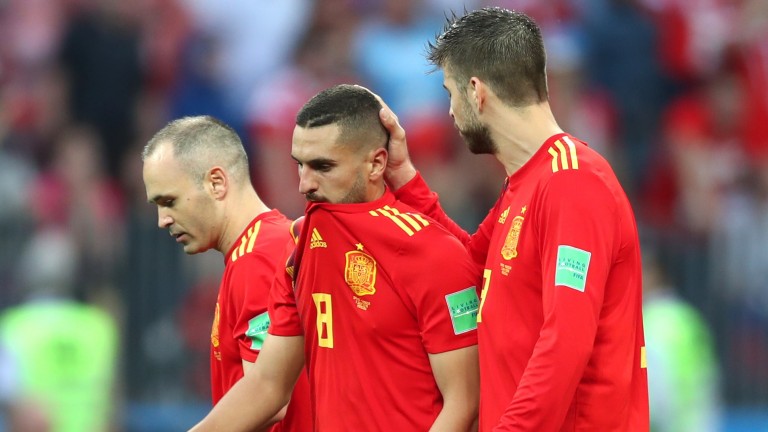 England are just 6-1 to win the World Cup after their path to glory was opened up by Spain's shock exit on penalties to hosts Russia in Moscow.

Gareth Southgate's side are seen as the best team left in their half of the draw by bookmakers and have been given a golden opportunity to reach their first final on foreign soil.

Some bookmakers are offering just 5-1 that England bring home the trophy, fully justifying Southgate's decision to rest players against Belgium and conveniently head into the half of the draw that avoids France and Brazil.

Spain, who had been favourites at one stage during the tournament, paid the penalty for a lethargic performance in the 1-1 draw before Koke and Iago Aspas had their shootout spot-kicks saved by Igor Akinfeev.

All four Russians scored their penalties and in regulation time Artem Dzyuba converted a spot-kick to cancel out an early own goal from Sergei Ignashevich.

Russia, who had been 50-1 shots to win the World Cup, are now 20-1 but they will not have been the only ones celebrating with all the sides left in the bottom half of the draw seeing a major opportunity to at least reach the final.

Spain joined Germany, Argentina and European champions Portugal on the scrapheap, although there was some consolation for backers of La Roja with bet365, who are refunding tournament outright losses on any nation knocked out on penalties.

There was a far less expensive refund as Denmark also went out via penalties in a dramatic tie against Croatia, who will meet Russia in the quarter-finals.

Huddersfield's Mathias Jorgensen gave Denmark a first-minute lead only for Mario Mandzukic to quickly equalise in a game that had no more goals. Luka Modric's penalty was saved late in extra-time by Kasper Schmeichel but Croatia came through 3-2 in the shootout.

Croatia are alongside England at 6-1 to win the World Cup and Sky Bet rate them 8-13 to reach the semi-finals with Russia at 5-4.

The elimination of Spain ended three-goal Diego Costa's chances of claiming the Golden Boot and players such as Isco and Andres Iniesta were knocked out of the Golden Ball betting too.

Harry Kane is 11-8 to finish as the tournament's top goalscorer and 7-1 to be named as the best player. Kylian Mbappe heads the Golden Ball betting at 5-1 with Philippe Coutinho at 7-1 and Modric is available at 8-1 with Betway

Uruguay are concerned that Edinson Cavani will miss Friday's opening quarter-final against France with a hamstring problem. Les Bleus and Brazil are 7-2 joint-favourites for the trophy.