England 5-4 for series despite crushing defeat 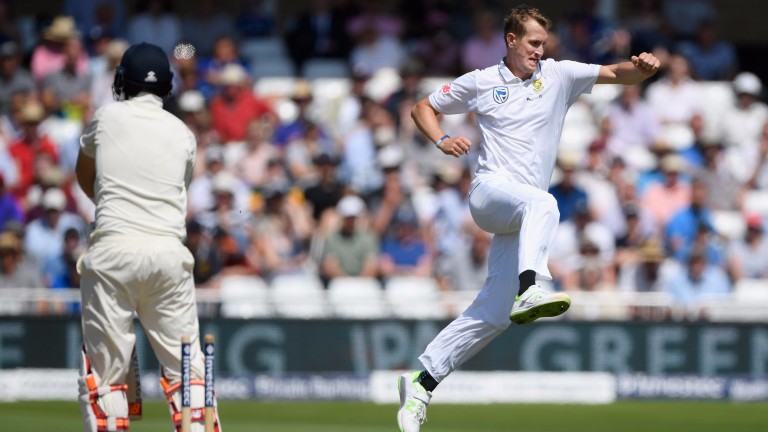 South Africa are 10-3 to win the Test series against England after squaring the four-match contest at 1-1 with a crushing victory at Trent Bridge.

Ladbrokes make England 11-10 to win the series – they had been 1-7 after their impressive win at Lord’s in the first Test – and a drawn series is 13-5 with Betway.

The Proteas, inspired by the return of captain Faf du Plessis from paternity leave, had been 1-7 at the start of day four and England never looked likely to upset those odds.

Set 474 for victory, the hosts lost four wickets in the morning session, including key batsmen Joe Root and Alastair Cook, and by lunch South Africa were 1-66 to win the Test with England 50-1 and the draw 100-1.

Jonny Bairstow chipped a catch to mid on just after the interval and the rest of the batting folded tamely as England were bowled out for 133 to lose by 340 runs.

New captain Root must rouse his side for the third Test which starts at The Oval on July 27 and the series finale at Old Trafford on August 4.

South Africa’s fast bowler Vernon Philander was named man of the match after taking five wickets and scoring 54 and 42 in Nottingham and the tourists should welcome back paceman Kagiso Rabada from suspension at The Oval.

Root was 9-4 joint-favourite with Cook to be England’s leading series runscorer and the skipper has a commanding lead in that heat, scoring 281 runs in the first two matches with Moeen Ali next in the chart on 139.

Hashim Amla, 9-4 favourite for South Africa at the start of the series, has scored 205 runs and all-rounder Philander is his nearest challenger on 167.

Spinners Moeen (14 wickets) and Keshav Maharaj (ten wickets) are the most successful bowlers for the two sides.