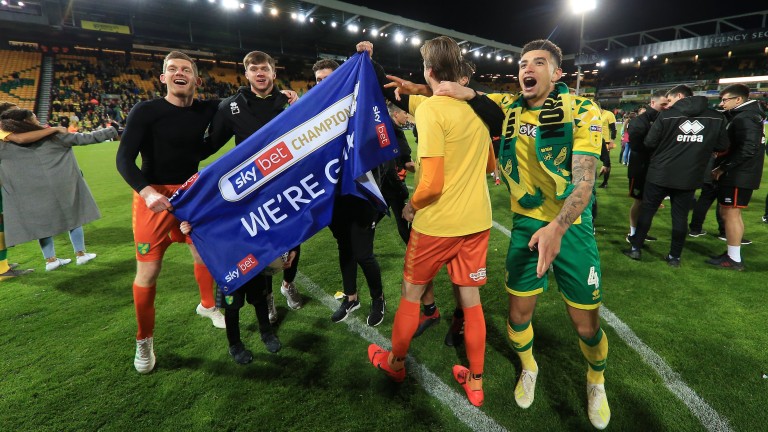 We still do not know what matters most, but we do know something.

We do not know who will be champions, but we do know that Cardiff, Fulham and Huddersfield will drop out of the Premier League to be replaced by Norwich, Sheffield United and whoever wins the Sky Bet Championship playoffs – Leeds, West Bromwich, Aston Villa or Derby.

Twelve months from now, at the end of season 2019-20, where will Norwich be? Where will Sheffield United be?

One way of trying to answer those questions is not to think so much about the teams themselves as about others who in the past were like them. How well did they do in the Premier League?

First I considered results in the Championship and what they might augur for the Premier League.

Promoted teams averaged 87 points coming up from the Championship. Next season in the Premier League they averaged 39 points and 15th place.

This season Norwich reached 94 points and Sheffield United 89. They were fairly typical of previous Championship winners and runners-up. Results in the Championship on their own suggest that next season in the Premier League Norwich might get 41 points and Sheffield United 40. The playoff winners can be expected to accumulate between 36 and 38 points.

That could leave them on a knife-edge. Over the last 22 seasons the average number of points needed to stay in the Premier League was 37. During that time 55 per cent of playoff winners were relegated. Only 36 per cent of automatically promoted teams went straight back down.

Next I considered how much promoted teams might be able to pay players in the Premier League.

Fulham were promoted with a higher payroll than Cardiff then signed a lot more players last summer. According to the Global Sports Salaries Survey conducted by Sporting Intelligence, the average first-team wage this season is £1.7 million at Fulham and £1.0m at Cardiff. Yet Cardiff will finish above Fulham, albeit both will be relegated. Usually, though, there is a relationship between pay and performance.

I studied the payrolls of newly promoted clubs in the Premier League in the 18 seasons from 2000-01 to 2017-18. I expressed the payroll of each promoted club as a proportion of the total Premier League payroll for that season. By doing this I was able to remove the distortion of inflation. The six promoted teams with the lowest wage-shares were all relegated. Of the six promoted teams with the highest wage-shares only one was relegated.

Norwich sporting director Stuart Webber has said: “We will have the smallest budget in the league. We will spend the least money. I can guarantee that now.” They might spend least on transfer fees. I would be surprised if Norwich’s wage bill in the Premier League is lower than Sheffield United’s. I expect it to be about average for a promoted club, and promoted clubs average 39 points.

So you could say Norwich are likely to be paying for a team who should be able to anticipate 39 points. Sheffield United will perhaps pay for a team that could anticipate 38 points. These totals are close to the ones signalled by Championship results. Only in five of the last 22 seasons did a team with more than 37 points get relegated.

Discovering the secrets of success and failure

There is a branch of book publishing that could be called The Secrets of My Success. You know the sort of thing. Somebody becomes a successful businessman. They write a book. Anyone who buys it can find out what that successful businessman did. No doubt some readers then do the same things. How many of them become rich?

What we really need to know, but are never told, is how many people have done this and got nowhere. For any course of action there will be a range of possible outcomes. Sometimes things will work out well, other times badly. What typically happens?

Six members of the Manchester United youth team of 1992 went on to become first-team regulars: David Beckham, Nicky Butt, Ryan Giggs, Gary Neville, Phil Neville and Paul Scholes. Most seasons no more than one or two follow in their bootsteps. This is what usually happens.

Ajax for a long time have tried to develop technically superb players they can sell to richer clubs beyond the Netherlands. Many seasons in the Ajax first team there are one or two top players.

Only once every 20 or 25 years are there enough to take them to a Champions League semi-final. Most seasons the best prediction for what will happen to Ajax is not one of the most extreme things that could happen.