Elvira can go close on a course that should suit

Challenge Tour star could make his mark on bigger stage 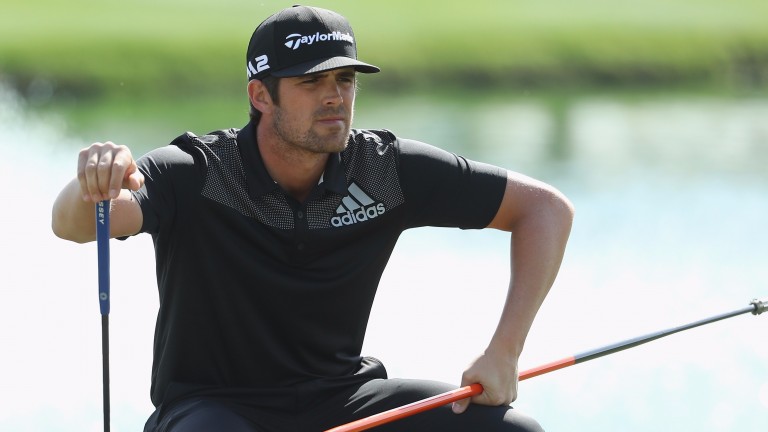 Spain's Nacho Elvira should find the North Course plays to his strengths
Warren Little
1 of 1
By Steve Palmer 8:00PM, JUL 25 2017

Tournament starts 6am Thursday
Live on Sky Sports Golf from 10am

Open Championship hangovers and a lack of star names could leave the coast clear for a pair of talented European Tour maidens to make hay in Germany this week.

Nacho Elvira has won four times on the Challenge Tour and the 30-year-old Spaniard has threatened victory in the higher grade over the last two seasons. He lost a playoff for the Hassan Trophy last spring, before finishing third in the Italian Open.

This term, Elvira contended in the Qatar Masters, finishing two shots shy of the playoff, and his last trip to Germany was positive. He trimmed two shots off his score in each round in the BMW International at the end of June (72, 70, 68, 66) to share eighth place.

Missed cuts on unsuitable links terrain in his last two starts in Ireland and Scotland are easily forgiven, and this aggressive player can get back among the birdies on a layout which plays to his strengths this week. Elvira won the Heineken Pro-Am at Valderrama on Sunday, closing with a 66, a confidence boosting warm-up.

Danish powerhouse Lucas Bjerregaard is five years younger than Elvira and should not be panicking about his failure to claim an individual title on the European Tour. Bjerregaard won the GolfSixes event alongside Thorbjorn Olesen in May, and looks more than capable of getting the job done on his own at some stage.

Length off the tee is essential to slaying the North Course in Hamburg, with par-fives aplenty, and Bjerregaard lies eighth on the Tour driving-distance stats with a beefy 309.6 yards average. He failed to make an impact in the recent links events, but seventh place in the Lyoness Open last month is evidence of his game being close enough for birdies on tracks he likes.

Bjerregaard, who has posted seven top-fives in his Tour career, finished fifth in the first European Open staged in Germany (2015).

A long, soft course in Germany which encourages attacking golf will have Dusseldorf man Marcel Siem licking his lips, and this experienced campaigner, who turned 37 the week before last, will be eyeing up a fifth European Tour title. Narrow missed cuts in Ireland and Scotland can be forgiven, while eighth place in the Rocco Forte Open and the Nordea Masters were two solid recent spins.

Add a third Tour maiden to the staking plan, with 24-year-old Belgian Thomas Detry, who has quickly settled on the circuit and looks a potential superstar. Detry won on the Challenge Tour by 12 shots last season, then started European Tour life with third place in the Alfred Dunhill Championship. He tied for second place in the BMW International a month ago and looks a serious title contender on his return to Germany.

Others to note
Charl Schwartzel
The South African quickly toppled down the Open leaderboard after getting in contention and finished in 62nd place. Class act in weak field, but no value at short prices.

Patrick Reed
The Ryder Cup star leads a gaggle of American raiders to Germany, including Jimmy Walker and Pat Perez. Reed missed the cut in the Scottish Open and Open.

Austin Connelly
The tiny Canadian youngster thrilled the Birkdale galleries with 14th place on his Open debut last week. Could flop a week later on a less suitable track.

Alexander Levy
The defending champion missed the Open cut by a shot, but could easily bounce back to form on a course he should enjoy much more this week.

Thorbjorn Olesen
The Dane, fourth in the Nordea Masters and third in the French Open, is enjoying a strong summer and makes most appeal of the market leaders.

Florian Fritsch
The German, who has a fear of flying, will be thrilled with this home game and may deliver his best form as a result. Tied for seventh in the 2016 European Open.

Where to watch Live on Sky Sports from 10am Thursday

Course overview The European Open is being staged in Germany for the third time and at the Green Eagle Golf Courses complex for the first time. The North Course at Green Eagle hosted a Challenge Tour event in 2010 – the ECCO Tour Championship. Andreas Harto won the tournament with an eight-under-par total on what was a par-73 layout. The North Course, which is 7,836 yards from the back tees, is being billed by event organisers as the longest course on the European Tour and the most difficult track in Germany. There are six par-fives on the standard scorecard – the fourth, ninth, 11th, 15th, 16th and 18th – but heavy rain which has fallen in the lead-up to the tournament means some tees will be pushed forward and the course will play as a 7,582-yard, par 72, with five par-fives

Story of last year Alexander Levy blew a four-shot final-round lead, before beating Ross Fisher at the second hole of a playoff at the Bad Griesbach Resort

Weather forecast Heavy rain has been falling in Hamburg this week and more showers are expected for the competition days. Spells of sunshine are forecast, too, and hardly any breeze throughout

Type of player suited to challenge This is an enormous layout, softened by rain, which short-hitters will approach with much trepidation. Tournament organisers may strive to shorten the track by tinkering with tees, but even at its minimum yardage, powerhouses should dominate

Thorbjorn Olesen has found some consistency this season to go with his undoubted natural talent and the Dane can be fancied to account for Joost Luiten in a European Open match.

Olesen has played in 13 European Tour events this year, missing the cut only once. He has made five in a row, including the Open last week, finishing fourth in the Nordea Masters and third in the French Open.

Olesen, who was second in the BMW International last year, should stay among the birdies on a suitable track in Germany this week.

Luiten has been producing solid but unspectacular golf for ten months and Olesen seems the more likely title contender.