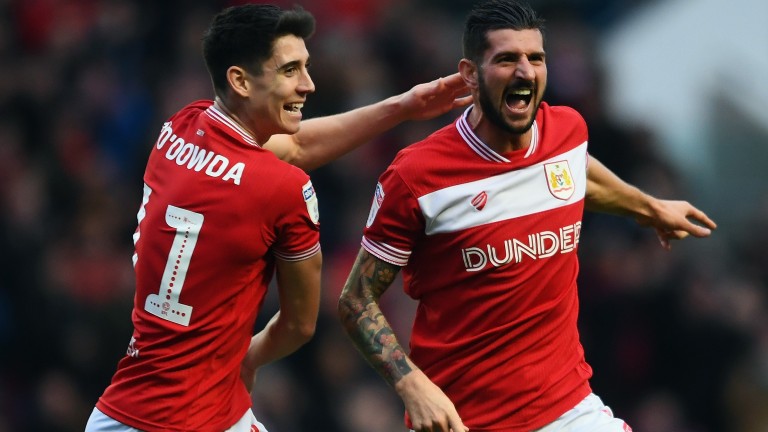 Middlesbrough have slipped out of the Sky Bet Championship's top six for the first time since August and their faltering promotion push could suffer another hammer blow with a defeat to Bristol City at the Riverside.

It will be a high-stakes occasion in the north-east with both teams desperate to climb back into the playoff places.

A point would do the job for Bristol City, but they can take all three if they play as well as they did when winning 3-2 at Sheffield United on Saturday.

City twice came from behind to beat the Blades and end a six-match winless run.

Their confidence should be high but Boro's belief is draining away after a sequence of four successive defeats.

Many Middlesbrough supporters have had enough of Tony Pulis's safety-first tactics and anxiety in the stands should assist the visitors, who look worth backing with the draw no bet.

Three successive defeats have ended Swansea's slim promotion hopes but the Welsh side can return to winning ways against Brentford at the Liberty Stadium.

To the untrained eye Swansea's recent results may indicate a lack of motivation. But they played well for the majority of Saturday's 2-1 loss at Nottingham Forest and should have take at least a point.

Graham Potter's young side have plenty of potential and will be targeting a strong finish to set them up for next term.

Brentford play a similar brand of passing football to Swansea and are also marooned in mid-table, just three points better off having played a game more.

Poor away results have cost the Bees, who have won just twice in 19 Championship road trips.

National League leaders Leyton Orient need five wins from their last seven games to guarantee automatic promotion and can get one of them at mid-table Bromley.

Justin Edinburgh's side were held to a 0-0 draw at Barnet on Saturday but had previously racked up five successive victories.

They are coming on strong at a vital stage of the season and should have too much quality and intensity for Bromley, who have taken just four points from six games since the beginning of March.