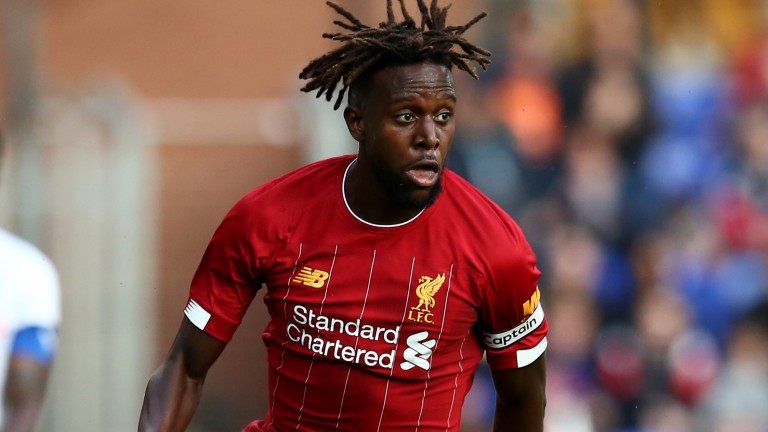 Free football tips for the Liverpool v Arsenal in the EFL Cup fourth round.

Liverpool and both teams to score has copped in each of the six Reds’ home games this season.

Joel Matip and Xherdan Shaqiri are still out. Jurgen Klopp will field a much-changed line-up which included Under-23 goalkeeper Caoimhin Kelleher who will start.

Reiss Nelson is injured. Stroppy skipper Granit Xhaka can expect to be left out.

Liverpool and Arsenal are just three matches away from a place in the EFL Cup final but that won’t stop Jurgen Klopp and Unai Emery ringing the changes at Anfield.

Klopp and Emery saw their sides pushed to the limit in Premier League skirmishes on Sunday afternoon and both clubs are back in action on Saturday.

European assignments await next week before a crunch weekend when Liverpool take on Manchester City while the Gunners go to Leicester.

In short, Liverpool and Arsenal may be three games from Wembley, but tonight’s last-16 showdown is some way down the respective managers’ list of priorities and it leaves punters second guessing quite how many alterations they’ll make.

At MK Dons in the previous round, Klopp fielded an entirely different starting eleven from the team picked to go to Chelsea three days earlier. Emery had just two days between matches against Aston Villa and Nottingham Forest and also made a complete overhaul.

Liverpool watchers expect Klopp to stick with Rhian Brewster, Joe Gomez, Curtis Jones and others though he’s also blessed with classy second-string operatives like James Milner, Naby Keita, Alex Oxlade-Chamberlain and Divock Origi who will all be expecting starts. Under-23s stopper Caoimhin Kelleher will start in goal for this assignment.

Emery, under huge pressure after back-to-back league setbacks against Sheffield United and Palace, might be more tempted to err towards experience though it would be hard to omit, for example, teenage striker Gabriel Martinelli, who has banged in five in four cup ties this term. And it’s not as though either Pierre-Emerick Aubameyang or Alexandre Lacazette are head and shoulders above the young Brazilian on current form.

The last 13 meetings between these sides have produced 57 goals – that’s 4.4 goals per game – and both teams have scored in 12 of the hosts’ 16 matches this season. Arsenal have notched 15 goals in four cup ties, while Liverpool, for all their excellence, haven’t kept a clean sheet at home since May.

One of those matches was a 3-1 win against Arsenal in August, a match in which Emery’s side were second best.

Little has happened since then to alter the view that they are still some distance behind Liverpool and the home win remains the bet.

Liverpool are unbeaten at home since they lost a EFL Cup tie to Chelsea 13 months ago and they are playing with an irresistible confidence. Even the kids who came in at Milton Keynes last month look supremely assured and alongside a handful of classy, experienced campaigners of the calibre of Dejan Lovren, Milner and Keita, the home team will still be ever so strong.

Defensive frailties are generally being masked, though there’s no hiding the flaws in the Arsenal rearguard. They are giving up chances galore and look so fragile when teams attack them with pace which is what they can expect this evening.

They have failed to win four of their last five away matches and if you concur that the Reds are the bet, then you may want to consider turning odds-on into odds-against by backing them to triumph in a match featuring at least two goals.