RP football writers give their tips for the trophy 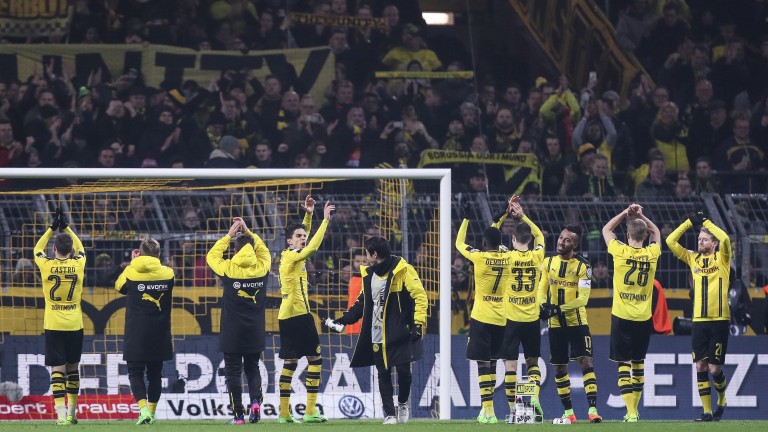 Mark Langdon’s verdict
Only three of the last 13 favourites and just one of the last six market-leaders at this stage of the Champions League went on to lift the trophy which should give punters plenty to ponder as Europe’s elite get ready for the knockout phase.

This is a brutal competition with few easy matches and with the margin between success and failure so tight that usually only minor details decide the ultimate prize.

It’s hard to think back to the last time the champions didn’t have a touch of luck along the way and that was certainly the case last season when Real Madrid beat city rivals Atletico on penalties.

The difference between happiness and heartbreak is so slender there may be value further down the market despite the obvious threat of front three of Barcelona, Bayern Munich and Real Madrid.

Barcelona have been handed a brutal last-16 date with Paris St-Germain and Luis Enrique’s side have failed to win seven of their last 15 away matches.

On the face of it Bayern are as strong as ever. However, the natives are restless following below-par performances under Carlo Ancelotti.

At this stage last season Bayern had scored 53 goals from 21 league games and conceded nine; this season it is 45 scored and 12 conceded from 20 – the goal difference is 11 inferior and the football is a long way off their peak.

Maybe it will come when it matters most and Real Madrid have timed their run better than most to win two of the last three European Cups to show Bayern how it is done.

There’s a stack of teams outside the obvious – Atletico, Manchester City, Juventus, Borussia Dortmund, Paris St-Germain, Monaco and Napoli – who all have something special that could be enough on a one-off basis.

Napoli have the daunting task of tackling the holders but they play without fear and possess one of Europe’s top coaches in Maurizio Sarri.

Unbeaten in 18 and with 40 goals scored in the last 13, Napoli are a slick attacking unit who will arrive in Madrid tomorrow with Dries Mertens in the form of his life after scoring three hat-tricks in his last nine Serie A appearances.

There’s a lot to like about the 80-1 shots apart from the draw against Real Madrid, while Dortmund should enter calculations at 12-1.

Dortmund matched Madrid in two Champions League matches and were a warm order in both which suggests the influential Asian syndicates rate them not far off the best sides in this competition.

No reason to desert big-priced Juventus

Didi Hamann's verdict
I said Juventus at the start and I’m sticking with the Italians at a price that still looks on the big side.

Max Allegri’s men have hardly put a foot wrong in Serie A this season and made light work of what could have been a tricky Champions League group with Seville and Lyon in it.

They’ve got the world-class proven scorer in Gonzalo Higuain which all the best club sides have and, of course, a superb defence protected by a brilliant midfield.

It’s such a strong side, and improved again on last year, they are the one threat to the Spanish giants.

City slickers can live with the best

Kevin Pullein's verdict
I will take Manchester City at 12-1. They showed in their group that at times they can live with the best. They won and lost against Barcelona.

Paradoxically both teams played some of their best football of the season in the games they lost.

There are at least eight teams who would not surprise me greatly if they lifted the trophy. As so often, the luck of the draw and roll of the ball could play a huge part.

Probably Barcelona and Real Madrid, winners in the last three seasons, are still the strongest teams, but they may not win every season.

Everything in place for Juve

James Milton's verdict
With doubts over the big three – especially given Barcelona and Real Madrid’s tricky draws – it may pay to look a little further down the betting.

Leicester’s slump means the juice has been squeezed out of Seville’s each-way value but Juventus, who inflicted a rare home defeat on the Andalusians on the way to topping Group H, look as strong as ever.

Juve came agonisingly close to knocking out Bayern Munich at this stage last season and have a far kinder draw against Porto this term.

They have tons of experience in defence and midfield, and versatility in attack with Miralem Pjanic and Juan Cuadrado teeing up Gonzalo Higuain, Paolo Dybala and Mario Mandzukic.

Monaco are worth a small interest at 66-1 as I expect them to cause Manchester City plenty of problems in the last 16.

They did the double over Tottenham in the group stage, average three goals per game in Ligue 1, and the squad is packed with brilliant young players.

Steve Davies's verdict
Barcelona have had more hiccups than usual over the first half of the season, but it’s the second half that matters and this is when the Catalan giants are going to come hard.

A hard-fought two-legged Copa del Rey win over Atletico will have helped in some small way to exorcise ghosts of last season’s Champions League exit at the hands of the Madrid men.

Once again the goals are flowing and when Messi, Neymar and Suarez are in the mood very few defences, even the best ones, can repel them over one leg, never mind two.

Take on top trio with Juventus

Bayern failed to lift the trophy with Pep Guardiola in charge and their squad is no stronger than it was during his tenure.

Juventus have a superb home record and look likely candidates to trouble the big three.

They are starting to move clear at the top of Serie A, which will allow Max Allegri to prioritise Europe and they can benefit from a last-16 draw against a weak Porto side.

Seville are also of interest. While they look unlikely to last the pace in La Liga, that might also enable them to mount a serious challenge in Europe.

Their Europa League exploits should stand them in good stead and they start their knockout campaign against a Leicester side in disarray.