Don’t expect a deluge of goals after a red card 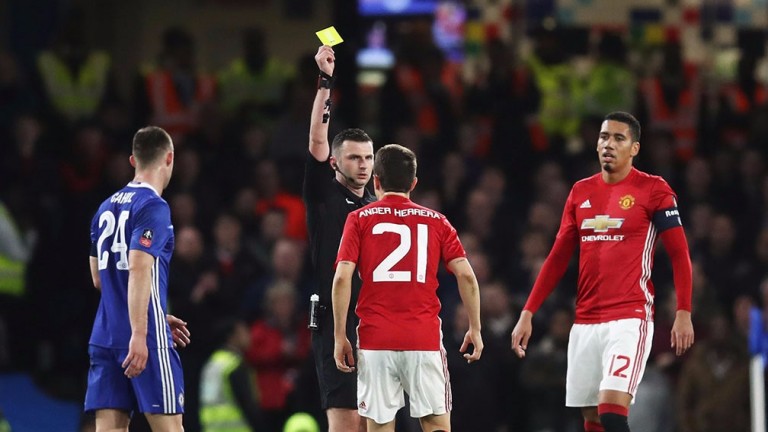 Referee Michael Oliver blew his whistle and pointed for a free kick. He reached into his pocket and pulled out a yellow card then a red card. Ander Herrera had been sent off for a second bookable offence. Oliver raised his eyebrows and shrugged his shoulders as if to say: “I did not have any choice”.

Manchester United were reduced to ten players in the 35th minute of last Monday’s FA Cup quarter-final at Chelsea. From that moment the game changed. The score at the time was 0-0. Afterwards Chelsea scored only once without conceding but the play was much different.

It illustrated yet again that playing against ten is easier than playing against 11. Why does anyone doubt this? Otherwise surely teams would elect to start with ten – or nine, or eight, or even the minimum of seven?

Yet still we hear players, managers and journalists repeat the old saying that playing against ten is harder than playing against 11.
Chelsea won the shot count 7-2 before the red card and 13-2 after.

Although they scored only one goal they should have added more – though for United Marcus Rashford could have equalised, and what a noise we would have heard then from believers in old wisdom.

I identified Premier League games from the last 19 seasons in which a red card was shown when scores were level and not shown again – games similar in those details to the FA Cup tie at Stamford Bridge.

These seemed to be games where at 11 v 11 the teams were evenly matched. I say this because the impact of being reduced to ten players was the same for home teams as for away teams, suggesting that typically a full strength home team were the equals of a full strength away team – no more and no less.

The situation was slightly different, I accept, at Stamford Bridge where even at 11 v 11 Chelsea were more likely winners.

That suggests playing with ten for a whole 90 minutes would be equivalent to giving your opponents a goal start.

Some players are sent off for conceding a penalty or free kick from which a goal is scored. So I ignored three minutes after a red card. The average number of goals scored in the rest of those matches was 1.12.

The average time of a red card was the 56th minute. In other Premier League games the average number of goals scored in the last 31minutes (a period that starts in the 60th minute, which is the fourth minute after the 56th minute) was 1.07.

On this evidence a red card increases the number of goals we should expect in the rest of a match by 0.05 – that is about one extra goal for every 20 matches with a red card.

Bruce Springsteen said that 98 per cent of the ideas he gets for songs come to nothing. They never develop into a tune on a record.

Warren Buffett, the legendary stock market investor, said he spends a long time looking for a good deal before he sees one. He likens himself to a baseball batter with one crucial advantage: he never has to swing.

He said: “Investing is a no-called strike business, which is the best business you can be in. I can look at a thousand different companies and I don’t have to be right on every one of them, or even fifty of them. So I can pick the ball I want to hit.

“And the trick in investing is just to stand there and watch pitch after pitch go by and wait for the one right in your sweet spot. And if people are yelling ‘swing, you bum’, ignore them.”

Take only opportunities that after close examination appear to be good. It is obviously sound advice.

Then you have to hope they really are good, and that there are enough of them to give you what you deserve. Especially if you are buying stocks. Or making bets.

You have to hope for an acceptable combination of quality and quantity. Two per cent of Springsteen’s ideas have still produced enough songs for almost 20 albums.

Risk assessment should be your priority

That is not the way most bettors think. Perhaps it should be. Many bets will lose no matter how good you are. And Buffett sometimes breaks his rules, though unintentionally. Sometimes even one of his investments goes wrong.