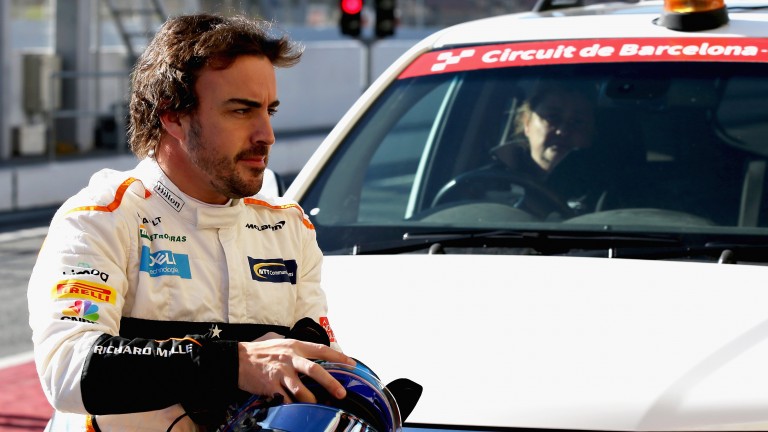 Fernando Alonso will be hoping for better from McLaren this year
Charles Coates
1 of 1
By Adam Scriven UPDATED 8:15PM, MAR 21 2018

Mercedes
Drivers
44 Lewis Hamilton title odds 8-11
77 Valtteri Bottas 14-1
Engine Mercedes
Last three years constructors position
(most recent on right) 1-1-1
The dominant team of the hybrid era look set to be top dogs again. They enjoyed a trouble-free winter programme and have been oozing confidence. They didn’t even bother to try out the new hypersoft Pirelli tyre, on which the fastest times of preseason were set, and that is a sign they are not prepared to show their hand just yet.

Ferrari
Drivers
5 Sebastian Vettel 4-1
7 Kimi Raikkonen 40-1
Engine Ferrari
Last three years 2-3-2
It all fell apart late on for Sebastian Vettel’s title charge last year but splitting the Mercedes drivers in the standings was still a fine effort. Ferrari have set the headline times with their curiously smoky car in testing but seasoned paddock watchers are not convinced.

Red Bull
Drivers
3 Daniel Ricciardo 12-1
33 Max Verstappen 8-1
Engine TAG-Heuer (Renault)
Last three years 4-2-3
Max Verstappen won two of the last six races of 2017 pretty much on merit and with a stronger start to the season they would probably have been involved in the fight between Mercedes and Ferrari. Testing has been solid and second place in the constructors standings will be the least they are aiming for.

Force India
Drivers
11 Sergio Perez 300-1
31 Esteban Ocon 300-1
Engine Mercedes
Last three years 5-4-4
The ‘little team that could’ have outperformed their budget in finishing best of the rest for the last two seasons. They are likely to face strong competition for that title from Renault and McLaren but the Silverstone outfit should never be underestimated.

Williams
Drivers
18 Lance Stroll 1,000-1
35 Sergey Sirotkin 1,000-1
Engine Mercedes
Last three years 3-5-5
Williams have been in decline for the last three years and that looks set to continue. Testing was not encouraging and their inexperienced pay-driver line-up were regularly outpaced by test driver Robert Kubica. Points finishes could prove hard to come by.

Renault
Drivers
27 Nico Hulkenberg 150-1
55 Carlos Sainz 150-1
Engine Renault
Last three years 6-9-6
The French squad finished last season with the fourth-fastest car. They enjoyed a good winter and their solid driver line-up should give them every chance to end up as the top midfield team.

Toro Rosso
Drivers
10 Pierre Gasly 1,500-1
28 Brendon Hartley 1,000-1
Engine Honda
Last three years 7-7-7
The team’s relationship with Honda has got off to a promising start with impressive reliability and decent top-end speed. It would be a surprise if they can regularly crack the top ten though.

Haas
Drivers
8 Roman Grosjean 1,500-1
20 Kevin Magnussen 1,500-1
Engine Ferrari
Last three years /-8-8
Now in their third year, the American team will look to move up the grid, and encouraging pre-season results suggest they should be fighting for points regularly.

McLaren
Drivers
2 Stoffel Vandoorne 150-1
14 Fernando Alonso 25-1
Engine Renault
Last three years 9-6-9
A switch from Honda to Renault engines was supposed to provide a power boost and better reliability but problems plagued their pre-season. They showed good speed at times but the troubled winter may affect their early campaign.

Sauber
Drivers
9 Marcus Ericsson 2,000-1
16 Charles Leclerc 2,000-1
Engine Ferrari
Last three years 8-10-10
A tie-in with Alfa Romeo has ensured the future of Sauber, who are now basically a Ferrari B-team. We are unlikely to see much improvement from them this year, though.