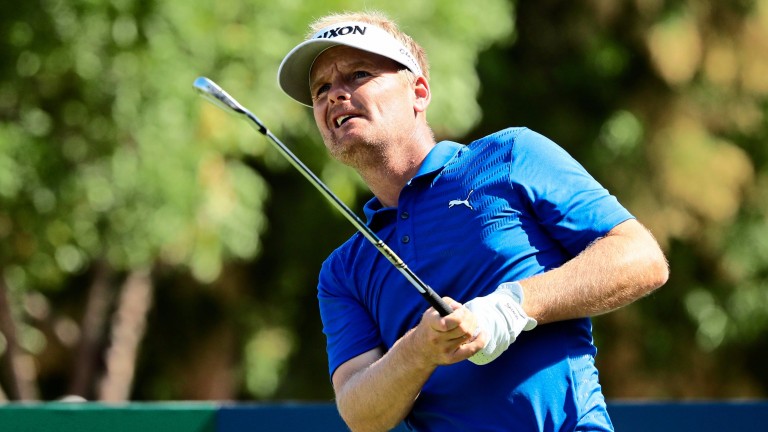 Soren Kjeldsen of Denmark tees off during the DP World Tour Championship
Andrew Redington
1 of 1
By Steve Palmer 11:30AM, NOV 26 2016

Denmark are dominating the World Cup of Golf, the combination of Soren Kjeldsen and Thorbjorn Olesen reaching 14 under par through 54 holes at Kingston Heath, Melbourne.

Denmark have never won the World Cup before and started with nine teams shorter than them in the outright betting this week, but a magnificent second-round 60 in the fourballs has put Kjeldsen and Olesen in charge.

Solid foursomes efforts either side of the 12-under-par Friday – a 72 and a 70 – have left Denmark four shots clear with only the final fourballs session to come. The ante-post 22-1 chances have shortened to 2-7. Both players use their own ball in fourballs, with the best score counting.

The United States – Rickie Fowler and Jimmy Walker – are in second place. The Yank raiders were 9-1 pre-tournament but are best at 6-1 with 18 holes to play. Ante-post 5-1 favourites Australia need serious Sunday fireworks to challenge, sharing 11th spot, ten shots adrift.

THE foursomes was always going to be by far the most challenging aspect of the World Cup for Denmark because Thorbjorn Olesen's driving can be erratic. With both foursomes sessions out of the way, Cup glory looks at the mercy of the Danes.

The closest Denmark have come to a wobble was at the par-four 11th hole in round three – a wild slice off the tee by Olesen flew into the trees, resulting in an unplayable lie. Ice-cool Kjeldsen kept his head, though, making sure only one dropped shot went on to the card. This combination does not look like buckling.

Fourballs golf is perfect for Denmark. The rock-solid Kjeldsen can be relied upon to grind out fairways and greens, churning out pars, while the explosive Olesen can be a birdie machine. Olesen's occasional driving disasters are not seriously punished in this format.

Bursting with form and confidence, as well as strong desire to become their country's first World Cup winners, it would be a surprise if Denmark failed to convert from four shots ahead. Olesen has recent experience of frontrunning – he won the Turkish Airlines Open at the start of this month. Both Danes are four-time champions on the European Tour.

Jimmy Walker has managed to raise his game for Kingston Heath, having performed abysmally in the build-up, but the States will probably not have enough fourballs birdies in them to reel in Denmark.

China recovered well from a dire start to the third-round foursomes to stay in contention and the capable pairing of Ashun Wu and Haotong Li may emerge as greater dangers to Denmark. The contest for second place (assuming Denmark triumph) looks hugely competitive, with three strong teams – France, Japan and Spain – sharing fourth place.

Racing Post Sport followers do not need to get further involved in the outright betting. Hopefully 22-1 headline selection Denmark can get the job done, with 33-1 back-up investment France delivering each-way booty. China, USA, Japan and Spain are the potential party-poopers.

Denmark and USA tee off at 12.25am UK and Ireland time tonight in the final twoball. The best final-round fourballs wager is Belgium, with the powerhouse duo of Nicolas Colsaerts and Thomas Pieters relishing this format. Expect the big-hitting Belgians to sign off with a flourish, leaving the Canadian pairing of David Hearn and Adam Hadwin behind.