Relationship between goals and corners 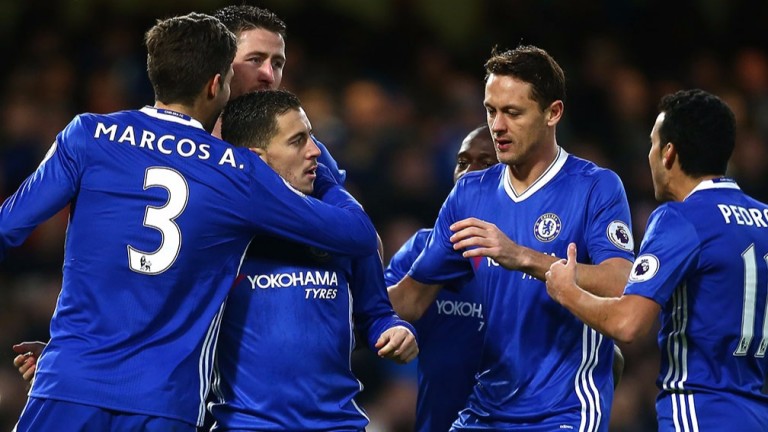 Chelsea have won 12 Premier League games in a row. Will there be a 13th victory on Saturday at home to Stoke? More likely than not, but how much more likely seems to be expressed reasonably in match odds of 2-7.

What might have been underestimated is the extent to which Chelsea could dominate the ball, territory and some of the occasional consequences thereof – such as corners.

Back Chelsea on a corners handicap of –2 at evens with Sky Bet. To trigger a payout Chelsea must take at least three corners more than Stoke.

There is generally a relationship between goals and corners. More of one, as a rule, coincides with more of the other.

The result-related markets imply more than a 75 per cent chance of Chelsea scoring each goal that is scored at Stamford Bridge this afternoon.

Most seasons Chelsea score about 75 per cent of the goals in their home games. And this season, as in other recent campaigns, Stoke are fairly typical Premier League opponents.

In games with such characteristics the chance of the home team winning the corner count by more than two would usually be about 4-5.

Chelsea have taken an abnormally small share of the corners in their Premier League games this season.

They did not win the corner count by more than two in any of their last five home fixtures, among which were visits from mid-table sides Bournemouth, West Brom and Everton.

However, that is strange for an Antonio Conte team. Juventus took a large share of the corners in Serie A when they were coached by the Italian.

And for a long time Stoke have taken an unusually small share of the corners in their games.

Mark Hughes has managed Stoke in 66 Premier League away games, and in 39 of those the Potters lost the corner count by more than two – 59 per cent.

Most of those games were against opponents who did not spend as long with the ball in Stoke’s half as Chelsea are likely to do.

Evens is a price that implies a 50 per cent chance of a bet being successful.

In any market in any match any outcome is possible. Arguably, though, the chance of Chelsea winning the corner count against Stoke by more than two should be considered greater than 50 per cent.

Crystal Palace are probably around the same level as the ten teams above them in the Premier League.

During the rest of the season they might all collect points at similar rates. While that is the good news for Palace, the bad news is that the other teams have a head start of up to ten points on them.

Palace drew their first game of Sam Allardyce’s reign meaning they have 16 points from 18 games – one place and two points above the relegation line.

Tomorrow they complete the first half of their season at Arsenal.
Over the second half of the last 21 seasons there was little difference in the number of points gained by most teams who finished the first half lower than sixth.

In that part of the table there was hardly any difference in the average number of points won in the second half of a season by teams who won quite different numbers of points in the first half.

That suggests there was little difference between them in ability and that the sometimes large differences in points gained during the first half can be put down mostly to luck. Ex-Eagles boss Alan Pardew could be excused a wry smile.

If Palace accumulate points during the rest of the season at the same rate as other teams who found themselves with 16 points after 18 games, they will finish with 39 points, enough to have avoided relegation in at least 17 of the last 21 seasons.