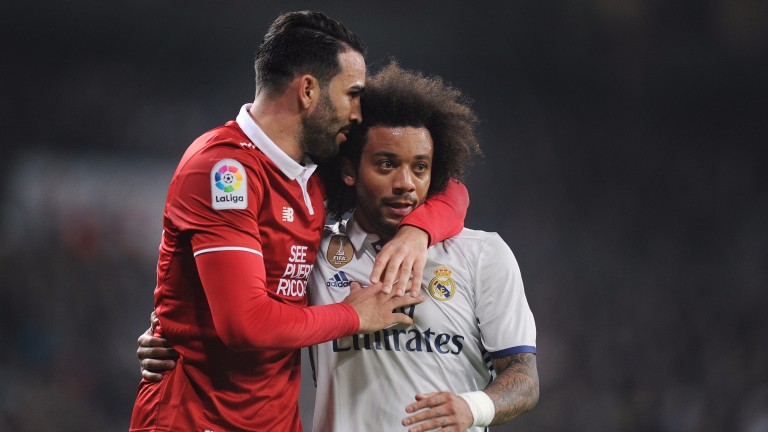 Real Madrid took a giant step towards the Copa del Rey quarter-finals by defeating Seville 3-0 at the Bernabeu last Wednesday and may be content to play a containing game in the return match at the Sanchez Pijzuan Stadium.

And they are going to rely even more on their fringe players in Andalucia after Zinedine Zidane's decision to leave Ronaldo, Luka Modric, Isco and James Rodriguez out of the 19-man squad.

Rodriguez - scorer of two of Real's first-leg goals - will be missed but Zidane has taken most of his first-choice defenders, including Ramos, who stands by to make his first Copa del Rey appearance of the season.

Alvaro Morata and Karim Benzema will be relied on to make the difference in attack but Real's starting 11 is likely to be stronger in defence than attack.

Seville need an early goal to give them hope of turning the tie around and manager Jorge Sampaoli has showed no sign of raising the white flag after naming most of his regulars in the squad.

The notable exception is midfielder Steven N'Zonzi, who has turned down the offer of a new contract and is a reported transfer target of Barcelona.

Seville are the third highest scorers in La Liga but have won just three of their last 18 meetings with Real and all of them by a single goal.

They will be up against a disciplined Real rearguard and could soon run out of ideas which may lead to a low-scoring outcome.