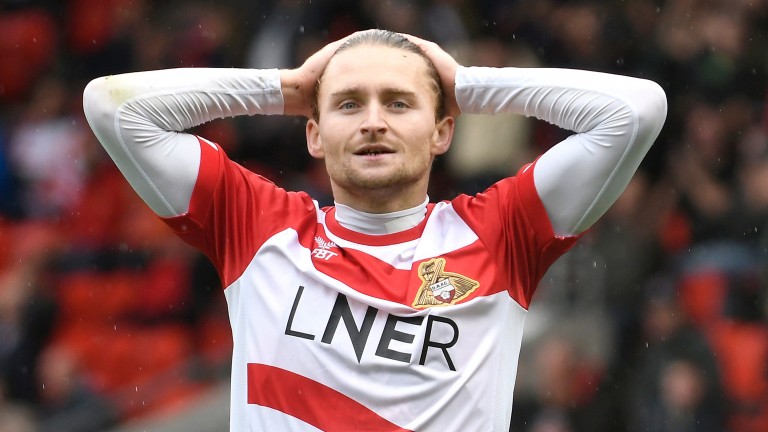 The story of the match
Charlton ran out worthy 2-0 winners at The Valley and they were in control for most of the match. Doncaster's best spell came in the opening five minutes when Herbie Kane was denied from close range by Addicks goalkeeper Jed Steer.

The hosts went ahead when Joe Aribo pounced on a loose ball from a corner and their advantage was doubled after 33 minutes as Lyle Taylor's centre was headed home by Karlan Grant.

Doncaster goalie Marko Marosi must have been disappointed with his part in Grant's goal as he failed to stop a fairly soft effort, and his manager Grant McCann admitted "he should have saved it."

Charlton continued to push for a third goal in the first half and they nearly had it only for Jamie Ward's free kick to hit the post.

McCann sent his team out early after the interval and made two half-time substitutions, swapping wingers Paul Taylor and James Coppinger for Alfie May and Mallik Wilks, but the second 45 minutes were fairly uneventful.

Aribo shot wide for Charlton and Ben Reeves denied May with an excellent block tackle as the hosts cruised to maximum points.

The final stats of nine shots each and three for both teams on target flattered Doncaster, who rarely looked like getting back into the match once they went behind.

Tactics
McCann's men were wide open in a 4-3-3 formation. The wingers are presumably not instructed to cover the full-backs as they barely came back past the halfway line when out of possession.

Rovers like to play football and some of their pretty passing patterns are pleasing on the eye, although the wisdom of being so offensive in a difficult away match has to be questioned.

Their full-backs, Danny Andrew and particularly Niall Mason on the right, are encouraged forward and Rovers were unable to dominate in midfield where the trio of Ben Whiteman, Kane and Matty Blair were outnumbered by Charlton's four.

It left home playmaker Ward in acres of space in the number ten position and on this evidence it is easy to understand how Rovers have conceded 14 goals in their last six Sky Bet League One games.

Strengths
If they get on top of opponents Doncaster are the kind of team who could overwhelm weaker sides with their possession-based football, and that is highlighted by the statistics with tenth-placed Rovers having accumulated 20 of their 25 points against sides below them.

This was not their afternoon but striker John Marquis is usually a threat and there is an abundance of trickery out wide with Coppinger, Taylor, May and Wilks. None of them were able to get into this game, though.

Weaknesses
Centre-back Joe Wright missed the trip with an ankle injury which is likely to see him sidelined for at least a month and his absence alongside Andy Butler could be a problem for Donny.

However, the longer-term picture is Doncaster are fairly easy to play against when they are out of possession. Whiteman went into a couple of crunching tackles early in the second half but they have gone 12 league matches without a clean sheet.

It appeared Marosi was targeted, with some wicked inswinging corners causing him problems throughout, and McCann said afterwards that fellow stopper Ian Lawlor would be pushing for a start now he has returned from injury.

Goalscorer notebook
Mason has not scored since February but has the potential to end the long drought. He had four shots from right-back and all of them were in the opening 25 minutes.

View from the camp
McCann said: "The two goals conceded were unacceptable and we lacked a bit of quality and nous at times."

Prospects
Doncaster are dropping after a fine start, winning only one of their last seven in League One with five defeats in that time. You always have to be wary of the odd bad day which any team can have but on this showing 2-1 for a bottom-half finish is of interest.

Opposition
Comedian Jim Davidson was the match sponsor and Charlton, who also won at Walsall on Tuesday, were all smiles after an excellent week which saw them climb back into the top six.

Consistency has been the problem for Athletic this term yet they appeared to be capable of matching last season's effort of reaching the playoffs without being good enough for automatic promotion.

Taylor and Grant are a handful up front with Ward in behind and there is quality with Ben Reeves and Aribo in midfield.

Centre-backs Krystian Bielik and Jason Pearce looks to be a strong partnership at the heart of the defence so the foundations are in place for Lee Bowyer's men to maintain a top-six push.