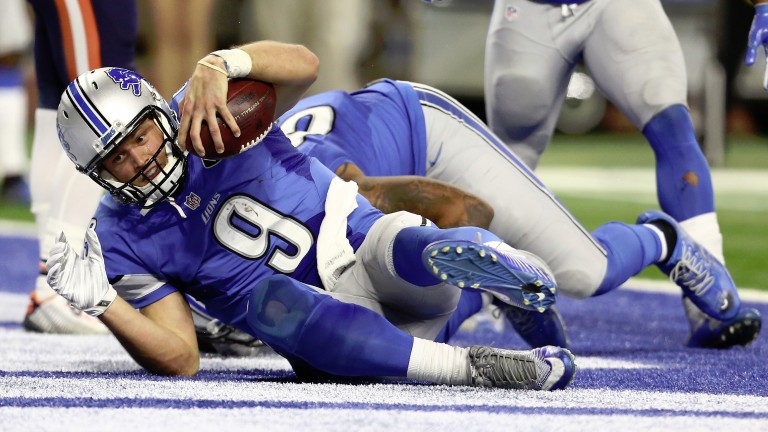 Detroit at New York Giants
Two teams who are 25-1 to be celebrating Super Bowl success in February face off in East Rutherford and it would be dangerous to rule out visiting Detroit.

The Lions will be concerned after quarterback Matthew Stafford suffered a hand injury in their victory over Chicago last week, but the NFC North leaders have shown great resilience this season.

Eight of their nine victories have come when they have been losing in the fourth quarter and their schedule means they cannot rest in the belief the divisional crown is already on their head.

After this match they face a trip to 11-2 Dallas and they do not want to be sweating on their final clash at home to resurgent Green Bay.

The Giants are the only team to have beaten the Cowboys this term and will be delighted to have held the Dallas offence to just seven points last week.

They still need to get things going offensively, but at least they benefit from having a quarterback in Eli Manning who will not get flustered if things are not going his way.

And they have a star in wide receiver Odell Bckham, who is coming into fine form just in time for what should be a decent playoff bid.

But while they do look the more likely winners, particularly if Stafford is handicapped by his injury, the resolve the Lions have shown throughout the campaign means they are likely to be battling it out right to the end.

Team news
Detroit Running back Theo Riddick continues to struggle with a wrist injury and fellow rusher Zach Zenner is in danger of missing the game with concussion.

New York Giants Guard Justin Pugh could be available after returning to practice this week following a knee problem, but linebacker Keenan Robinson has been struggling with a shoulder issue.