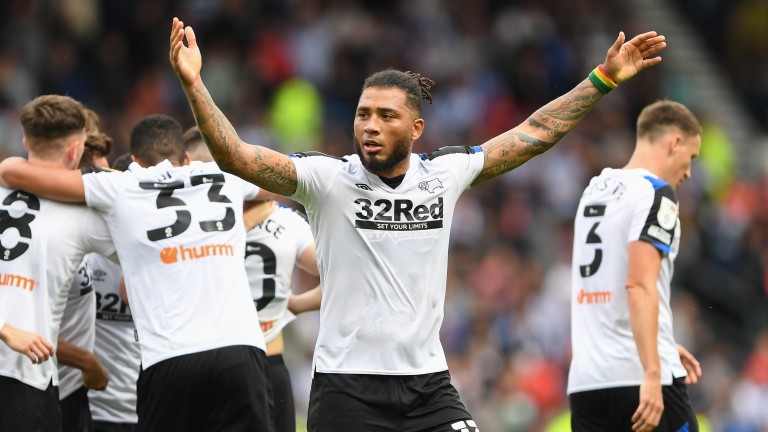 The experienced Colin Kazim-Richards should lead the line for Derby
NurPhoto
1 of 1
By Steve Davies 12:55PM, AUG 9 2021

Free football tips, best bets and analysis for Derby v Salford in the EFL Cup first round on Tuesday.

Derby
Lee Buchanan (thigh) is unlikely to figure, Tom Lawrence is a doubt and Jason Knight is out but new signing Ravel Morrison will be in the squad.

Salford
Boss Gary Bowyer is set to make one or two changes from the 11 who started Saturday's draw with Leyton Orient.

Wayne Rooney's Derby defied the odds in their season-opener against Huddersfield on Saturday and they can back that up by seeing off Salford City in the EFL Cup first round.

Once again, there is precious little faith from bookmakers in troubled Derby, who are odds-against to see off a side – notionally at least, though probably not in real terms – two divisions inferior.

Indeed, if the pre-season odds prove accurate, come 2022-23 these two will be stablemates in League One.

For now, though, Rooney can send out a decent enough starting 11, one that was good enough to hold Huddersfield to a 1-1 draw at the weekend and ought to be able to eclipse Salford.

Prospective backers of the Ammies will point to Salford beating Derby 2-1 in a friendly less than three weeks ago.

But there are few lessons to be learned from that exercise, which featured seven half-time substitutions from Rooney, other than that Derby carved out loads of scoring chances and only took one. Three weeks ago there were doubts they would even start the season due to off-field turmoil but on the pitch they looked decent against Huddersfield.

There is bags of Premier League pedigree in the Derby ranks although there remains a question mark over who will provide the goals for the lowest scorers in the Championship last term.

Persuading Ravel Morrison to join was an interesting move. When the former Manchester United starlet appeared in pre-season he looked a major threat and he could prove a shrewd addition to the group.

And if pre-season friendlies are any yardstick then punters should bear in mind that Derby beat a strong Real Betis side 1-0 immediately after that loss at the Peninsula Stadium.

They do look competitive under Rooney as they seek to end a run of eight competitive matches without a win.

And Salford will test them although they flattered to deceive last season in League Two when well-fancied, and may well do so again despite being sent off the basement jollies.

They certainly weren't noticeably better than Leyton Orient in Saturday's 1-1 draw, a 17th match in their last 19 which has featured two goals or fewer.

Under 2.5 goals, then, has to be a consideration but a Derby win at odds-against looks a better option.

Seventeen of Salford's last 19 matches have featured under 2.5 goals.