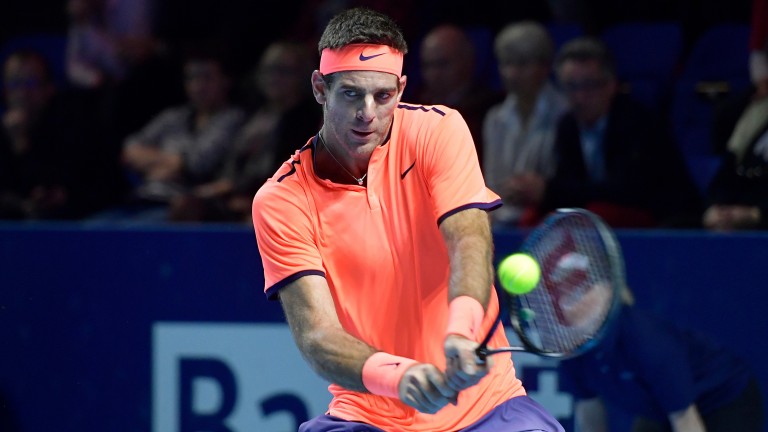 JM Del Potro v R Nadal
Juan Martin del Potro has had his career blighted by injury since claiming his sole Major title in New York eight years ago but the hard-hitting Argentinian is back and can earn himself a second shot at Slam success with victory over Rafael Nadal.

The Argentinian has endured more than his fair share of pain and disappointment. For supporters it has been a difficult watch but he has never let up hope of returning to the big stage.

Del Potro's victory in the last eight over the resurgent Roger Federer, who was seeking his third Slam of the season,was his best performance of the tournament and with the stakes raised there could be plenty more to come from the determined Argentinian.

The 24th seed - armed with a huge serve and devastating forehand - clawed his way back from two sets down to defeat Dominic Thiem in the last 16 and, although a busy campaign was clearly beginning to take its toll on Federer, his play in the quarter-final was flawless.

And Nadal, despite being considered a 4-7 chance for his third US Open, is another vulnerable opponent.

The Spaniard has not claimed a hard-court ranking title since winning in Doha in 2014 - the same season he won his most recent US Open crown - and his title credentials in this year's event have yet to be tested.

Nadal has not yet faced a player ranked in the top 50 and his quarter-final victory against teenage sensation Andrey Rublev, who had previously never gone beyond the second round of a slam, told us precious little.

Rafa leads the Argentinian 8-5 in their personal series but all five of Del Potro's wins have been recorded on a hard surface and that may be the telling factor.

Federer's defeat means Nadal will retain the world number one ranking next week but he dropped sets against Taro Daniel and Leonardo Mayer in the earlier rounds and Del Potro is overpriced in his bid to cause an upset.

K Anderson v P Carreno Busta
Alexander Zverev's early exit in New York left the bottom half of the draw wide open and towering South African Kevin Anderson could be the one to take full advantage.

Anderson had surprisingly never gone beyond the fourth round in a Grand Slam before his heroics in New York but his performances have scaled new heights and it's difficult to see how Pablo Carreno Busta can overcome his devastating serve.

The South African, who started the season as low as number 80 in the world rankings, served 18 aces in the quarter-final win against Italian Paolo Lorenzi and hit an impressive 22 when downing home hope Sam Querrey in the last eight.

Carreno Busta is improving and is yet to drop a set on his way to the last four. However, Diego Schwartzman is the only seed he has scalped and it's a big ask for a player who has won just two hard-court titles throughout his career.

Anderson can rattle off service games in quick time and the Spaniard, who has lost both previous meetings without claiming a set, could fall short.