Defensive wobbles are a concern for City 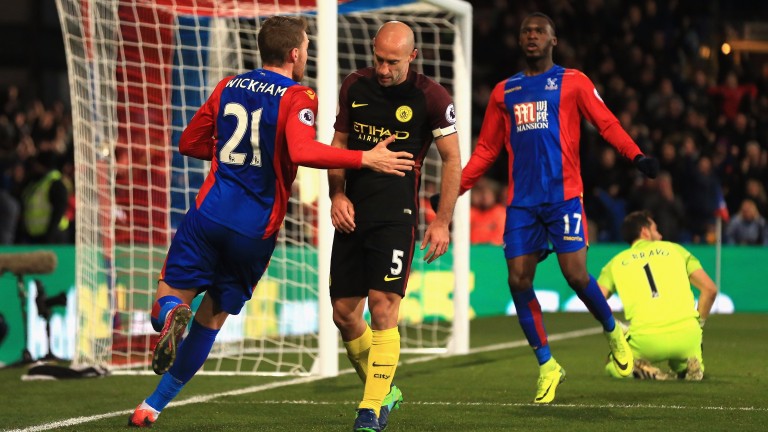 Betting on Manchester City winning and both teams scoring has copped in half of their Premier League matches this season and it could be a route to another payday when they visit Turf Moor on Saturday.

Blessed with a peerless attack and cursed with a less-than-reliable defence, City have seen goals going in at both ends whenever they take to the pitch.

You can have 19-20 that both teams score but since City are the top away scorers in the top flight, take the visitors to win as well.

Burnley boast a decent home record with four wins out of six – their only loss was a last-minute mugging by Arsenal.

They have ridden their luck, though, notably against Everton and spectacularly against Liverpool, who they managed to beat 2-0 having had just 20 per cent of possession.

It’s a credit to manager Sean Dyche that his team is disciplined enough to pull off such against-all-odds triumphs but that level of good fortune can’t go on indefinitely.

City are a class above and if they go about their business as usual and get classy midfielders Kevin De Bruyne and David Silva on the ball, the chances are going to pile up.

Scarred after Monday night’s 4-0 thumping at West Brom, Dyche will have been back to the drawing board in training, although there are unlikely to be no surprises in his tactics.

City are set to dominate possession, the shot count, the corner count and pretty much every measurable stat. And they can slaughter anyone when in the mood.

Pep Guardiola, like Dyche, also has a disappointing performance to respond to. City’s was at Borussia Monchengladbach in the Champions League, a 1-1 draw which had few redeeming features.

A gamble on three at the back – with Alexander Kolarov one of the three – didn’t work although Guardiola changed it at times as is the wont of a man who never stops thinking on his feet.

They are short of centre-backs and the two pencilled in for starts – Nicolas Otamendi and John Stones – can make errors, as does keeper Claudio Bravo.

To that end, Burnley have to fancy they can find the net, be it from a set-piece or when chasing the game should they fall behind. They’ve scored ten of their 11 goals at home and City have kept only one clean sheet in their last 13.

City score plenty of goals on the road – they’ve failed to score in only one of their last 11 away matches and that was at unbeaten Tottenham.

In the other ten games in that sequence they have banged in 26 goals.

Tom Heaton, the busiest keeper in the Premier League, has performed heroics this season and knows he’s in for another hectic afternoon.

Team News
Burnley
Sean Dyche has a full squad to pick from though will make changes following the 4-0 pasting at West Brom.

Manchester City
Vincent Kompany is out once again. Fabian Delph is still injured. Sergio Aguero and Pablo Zabaleta are doubts.