DeChambeau's approach doesn't appeal to me, but his price certainly does

Morikawa and Hatton can also enjoy the Masters at Augusta 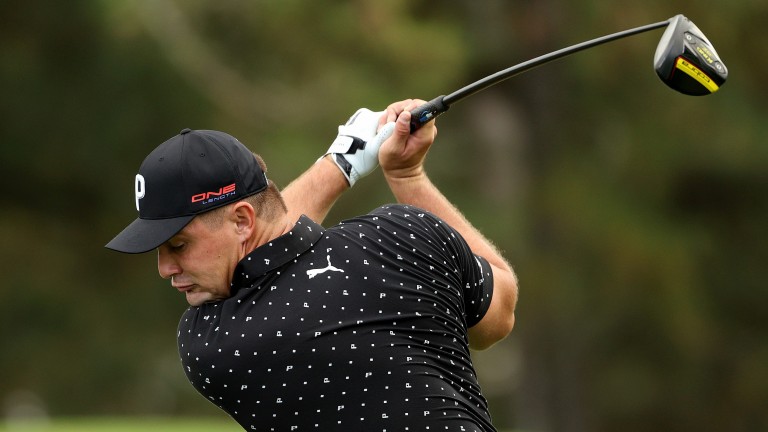 Beefed-up Bryson DeChambeau is all the rage at The Masters this week
Getty Images
1 of 1
By Bruce Millington UPDATED 9:30AM, NOV 12 2020

It goes back to my teenage years when I was so skinny I had to run around under the shower to get wet and could never walk over a cattle grid for fear of slipping under the bars and never being seen again.

Callous classmates would nickname me after whichever nationality was enduring a famine at the time, and if you wanted admiration you had to do your time in the gym.

I’d have given pumping iron a go if I’d had the strength to open the gym door, but I didn’t so I tried being funny and smart as a way of impressing girls instead. That didn’t work either.

And so my disdain towards men who lifted weights was founded, and maybe there’s a little bit of that which influences my antipathy towards Bryson DeChambeau, who went into lockdown looking pretty beefy but emerged from it like Popeye after a trough of spinach.

When he used his new physique, which is more commonly seen on a discus thrower or tight end than a golfer, to blast his way to victory in the US Open my spirits sagged.

Because not only was it clear the American was in such phenomenal shape he was going to overpower the sport, he was going to do so slowly and gracelessly. The player who created such a bad impression when barely bothering to shake Richard McEvoy’s hand after the Englishman had beaten him in the 2018 European Open, is notoriously slow on the greens, spending ridiculously long periods assessing putts from every possible angle.

Add to that a new ability to drive the ball 400 yards and you have a package that does not appeal to me at all.

I simply could not have coped with him bashing and boring his way to victory in the Masters this week, transforming one of the highlights of the year into a painful procession, so I have done what any sensible person would do in the circumstances and had a big bet on him.

Actually even if I was his biggest fan I would still be backing him, because putting my own inadequacies to one side he is terrific value at 8-1 even allowing for this tournament being so full of superb players.

Those odds suggest if you played this event nine times he would win one of them. I believe his power would probably yield more than a single victory and that Augusta will prove hopelessly vulnerable to his unique, freakish distance off the tee.

Throw in rain-softened fairways that will make his length even more advantageous and you have the makings of one of the best 8-1 shots I have seen in a while.

Because each-way punters can get up to an amazing 11 places in a 92-runner field that contains a few past champions who should be too embarrassed to still be showing up I shall augment my main punt with a couple of players who can make the frame.

Collin Morikawa, this year’s other Major winner, may weigh roughly the same as one of DeChambeau’s arms but he looks to have the game for Augusta and is big at 33-1, while Tyrrell Hatton has the heart and the ability to maintain his excellent 2020 with a prominent finish. He is as big as 28-1 but if you want the maximum extra places on either player you will need to bend on the price.

But I fully expect DeChambeau to cause a lot of problems by winning this week. Problems for his rivals because he could dominate them for years and problems for golf’s administrators, because unless they take action courses are going to be turned into pitch-and-putts and only people prepared to turn themselves into the Incredible Hulk will be able to compete.

Most of all, though, problems for the poor person who will be tasked with finding a Green Jacket into which he can squeeze his absurdly big arms and chest on Sunday evening.

But let’s not be too downhearted. Sports governors have made a fantastic effort to get the show back on the road after the disruption earlier this year and the reorganisation of the golf schedule has been a real triumph.

And even if the musclebound favourite runs away with it, it will still be wonderful to enjoy four days of golf at this iconic location, especially as this happens to be yet another irksome international football week.

Top handlers admirable but they're no magicians

Just how good can you be as a racehorse trainer? Is there really a level above excellent that merits adjectives like maestro, genius and legend?

It is a debate that flared up recently when a colleague expressed a view that there is only so much a trainer can do, which sparked a furious reaction from many who seem to believe some trainers have a Dr Dolittle-like ability to talk to the horses.

I don’t know enough about what goes on in a stable to have a view on how much magic is involved in getting horses to fulfil their potential and remain at their peak for a long time.

But I do believe one of the main keys to being successful is, as well as training horses, training owners to spend large amounts on stock for you to be able to work with.

Beyond that, an ability to run a business as efficiently as possible and a desire to learn and keep improving would be what separates the biggest names from the rest plus a bit of good fortune along the way and, of course, an appetite for long, hard, stressful work that would be beyond most people.

The trainer debate got me thinking along similar lines about football managers, especially after finally completing what was billed as the Tottenham documentary series but which effectively became the Jose Mourinho show after he had succeeded Mauricio Pochettino.

It was just as well he did for the series producers because it would otherwise have been a boring old slog for viewers. It was tough enough going at times even with the sport’s ultimate limelight-seeker taking centre stage.

They played a game, they trained, they shook hands every ten seconds, they ate in a ridiculously plush canteen and then every so often the monotony would be broken by a visit to an old folks’ home or an interesting behind-the-scenes insight like Danny Rose complaining to Mourinho about not getting a game.

But, for all that it failed to live up to its All Or Nothing title (it was neither in end as they scraped a Europa League spot)  it was fascinating to see how Mourinho operated, and the impression I was left with was that there is probably a limit to how good you can be as a manager but not to how bad you can be.

Mourinho is clearly extremely good. He is energised, intelligent and driven. And he knows how much instruction his players can absorb without them feeling overloaded.

But that had the effect of making team-talks surprisingly basic, and genuinely the kind of thing many fans with a fundamental grasp of the game could deliver.

It was also interesting to see at one point how keen he was to stress that he was not much of a player, which revealed that although he has enjoyed enormous success as a manager, he must still feel the need to acknowledge to the players that at times he was asking them to do things of which he was incapable.

I ended up liking him more than I did at the start. The surliness that had become more evident in recent years was replaced by a more upbeat disposition, albeit he still had his moments, such as when snappily telling the senior physio a player had to be fit for the next game even after having been told that was unlikely.

But in the same way trainers are most likely to shine if they are given fast horses and that there is no way to get a Shire horse to run like Shergar, the Tottenham series showed a manager’s success is largely dependent on how good his players are.

That's fine, though. I have huge admiration for the best football managers and the best racehorse trainers, even if I may stop short of believing they are blessed with magic powers.