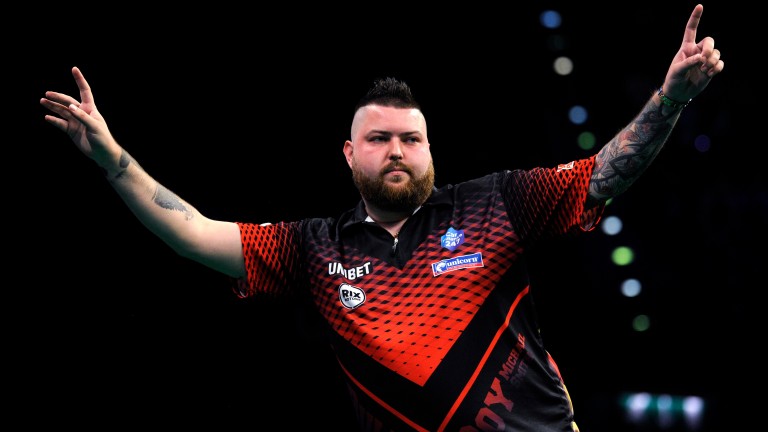 Michael Smith may have plenty to celebrate at Butlin's Minehead
Alex Burstow
1 of 1
By Steve Davies 3:50PM, NOV 25 2021

The darting glitterati are heading for Butlin's Minehead this weekend but it'll be no holiday for Gerwyn Price and pals as they chase down the last piece of silverware before next month's William Hill World Championship.

There's a £100,000 first prize up for grabs in this weekend's Ladbrokes Players Championship Finals in which Michael van Gerwen is the defending champion but Price is very much the favourite.

The fact that Phil Taylor and Mighty Mike, the two pre-eminent forces in the game over the last couple of decades, have between them won nine of the last 13 stagings of this major suggests the cream usually rises to the top.

And that's allowing for the vagaries of a draw which is based on performances over the 30 Pro Tour events in 2021 rather than world rankings, a scenario which means that Peter Wright and Van Gerwen, numbers two and three in the world respectively, are in the same quarter of the draw.

Price does look the man to beat after getting stronger and stronger on his way to Grand Slam glory last weekend but the first two rounds of this event are best-of-11 leg affairs, relatively cut-throat in a high-class field, so Gezzy looks plenty short enough at 3-1.

There are a whole stack of contenders at bigger prices and this is a tournament in which Paul Nicholson obliged at 80-1 and Kevin Painter was a 200-1 winner, so don't write off the outsiders.

Michael Smith, for example, looked fantastic in Wolverhampton. Never the most reliable of allies for punters, he did seem supremely focused at the Slam, emerging undefeated from a group featuring Gary Anderson and Raymond van Barneveld, before seeing off Joe Cullen and Van Gerwen in the knockout stage prior to succumbing in a semi-final thriller against Snakebite.

Bully Boy, twice a tour winner this year, can hardly complain about his draw – he has William Borland first up then either Daryl Gurney or Alan Soutar in round two – and proved last week that he is in splendid form. Over six matches in Wolverhampton he averaged around 96.

Cullen, another double winner on tour this year, has had a disrupted campaign but is also playing well, as demonstrated at the Grand Slam where he averaged 95 over four matches before losing to Smith in round two. The Yorkshireman finds himself in the bottom quarter and again has no reason to be unhappy with his draw.

The big name in the other half of Cullen's quarter is Jonny Clayton. The Ferret is the undisputed player of the year but at 6-1, like compatriot Price, he looks on the short side in such a testing event.

There's plenty of quarter betting to decipher, although quarter three looks one to swerve. There are some big prices around but it's possible that whoever wins that section will have to beat both Wright and Van Gerwen, which would be an almighty task.

The top quarter is all about Price and Jose de Sousa but there are alternatives to that pair, among them ageless Masters finalist Mervyn King.

King produced averages around the 100 mark in a couple of tussles at the Grand Slam and possesses all the tools, and the experience, to be able to navigate his way through a few rounds.