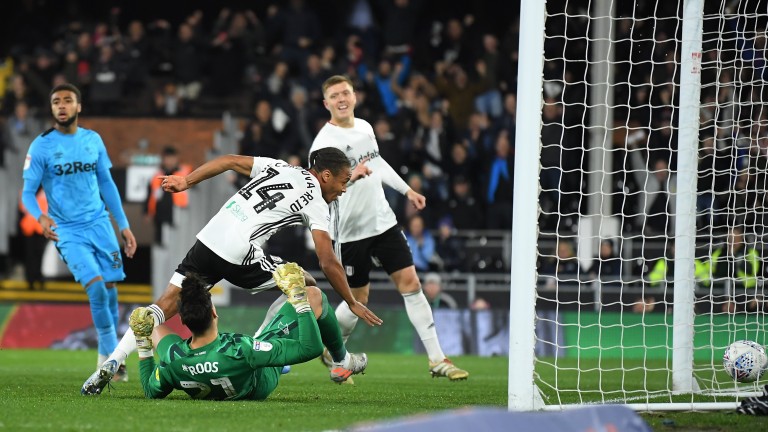 Fulham will be feeling much happier after Saturday's 2-1 success at home to Leeds and they look solid odds-on favourites to follow up with a victory over relegation-threatened Luton at Kenilworth Road.

The Cottagers kicked off December with three successive defeats and were under pressure going into the weekend.

Finishing in the playoffs is seen as a minimum requirement for Fulham, who showed plenty of ambition with their summer transfer dealings.

Undoubtedly the best bit of business they did was agreeing a new five-year contract for star striker Aleksandar Mitrovic.

The Serbian tops the second-tier scoring charts with 17 goals, which is almost half Fulham's 35-goal tally.

Mitrovic's penalty set Fulham on their way to victory over Leeds and the 25-year-old is an obvious threat to the Hatters, who have the worst defence in the Sky Bet Championship.

Luton are one point outside of the drop zone but have lost nine of their last 11 matches and look ill-equipped to cope with Scott Parker's side, who will be targeting a much stronger second half of the season.

Brentford and Swansea each have 37 points at the halfway stage but the markets expect the Londoners to perform better over the second half of the season and they are probably correct.

Swansea have lost just once in 11 road trips this term and have a good chance of scoring at Griffin Park.

However, their defence could be overwhelmed by the talented Bees attacking trio of Bryan Mbeumo, Said Benrahma and Ollie Watkins.

There should be plenty of entertainment but the home side look the likelier winners.

Leeds are picking up a few injury problems at a key stage of the season and they might not have everything their own way against fifth-placed Preston at Elland Road.

Marcelo Bielsa's title chasers will have to negotiate the festive period without influential playmaker Pablo Hernandez, who suffered a hamstring injury in Saturday's 2-1 loss at Fulham.

The Yorkshire giants have gone two matches without winning and may have to settle for a draw against North End, who are unbeaten in three games.

There should be plenty of entertainment at the Madejski Stadium, where improving Reading take on free-scoring QPR.

The Royals are pulling away from relegation danger, having won four of their last six home games. But they may struggle to contain QPR, who are the second-highest scorers in the division.

QPR lost 5-3 at Barnsley on their last road trip and the goals could flow at both ends in Berkshire.

Fleetwood's Sky Bet League One promotion push has stalled due to three games without a victory but the Cod Army can return to winning ways at Spotland.

Joey Barton's side need to improve on their away record of two wins, two draws and five defeats but there were encouraging signs on Saturday when they drew 2-2 at promotion rivals Rotherham.

The Cod Army won the shot count 16-11 against the Millers and can expect an easier challenge against 18th-placed Rochdale, who are sliding into relegation trouble.

Dale have lost six of their last seven league games, leaving them just five points above the drop zone, and their struggles are set to continue.

Shrewsbury are going under the radar in the League One promotion race and look decent value to achieve an eye-catching victory over Rotherham.

Solid defence has been instrumental for the Shrews, who are just two points outside the playoffs despite scoring just 19 goals – the third-lowest tally in the division.

They have lost just one of their last ten games in all competitions and dug out an impressive 1-0 victory at promotion rivals Blackpool on Saturday, inflicting the Seasiders' first league defeat since October.

Sam Ricketts' side are a tough nut to crack and have a good chance against the Millers, who have failed to win any of their last four games.

Rotherham were held 2-2 at Southend on their last road trip and will have to play a lot better to get anything in Shropshire.

Sky Bet League Two highflyers Forest Green have had a sticky patch but they can snap a six-match winless sequence when taking on basement boys Stevenage in Hertfordshire.

Rovers have not had much luck in recent weeks but they will feel a lot happier after coming from two goals behind to draw 2-2 at home to Swindon on Saturday.

They are one of the best passing sides in the division and their slick football could be too much for Stevenage, who lost 5-1 at home to Crewe in their first match under new manager Graham Westley.