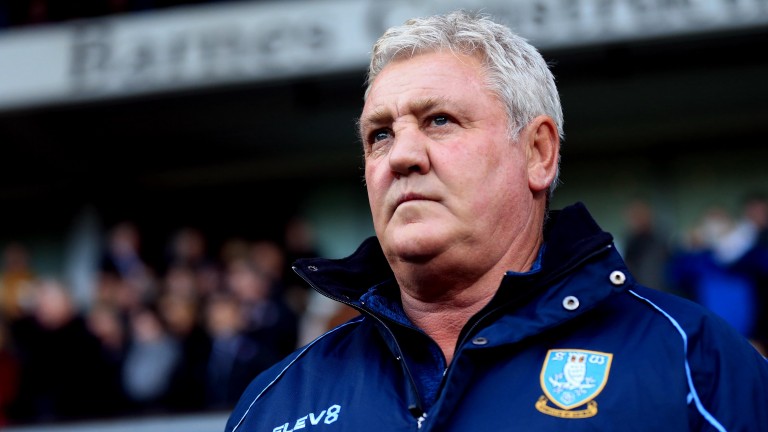 Steve Bruce got off to a flying start in the Sheffield Wednesday dugout, steering them to a 1-0 success at Ipswich, and his honeymoon period could be extended with a victory over third-bottom Reading at Hillsborough.

When accepting the job in December, Bruce let it be known he would not be available to take up the position until the end of January.

But Bruce's assistant, Steve Agnew, did a sterling job in his absence and there were strong foundations in place when the new manager took up his duties last week.

The win at Ipswich increased Wednesday's points tally to 14 from the last seven games and removed any lingering doubts about them getting sucked into the relegation scrap.

Achieving anything more than consolidation would take a huge effort but the nine-point gap to the playoff positions is less than the distance between them and the drop zone (13 points) and Wednesday will be looking to attack the final 17 games and see where it takes them.

Reading are in a perilous position and face an almighty scrap to stay in the Sky Bet Championship.

They are the highest scorers in the bottom four but there was little attacking intent on show when they drew 0-0 at home to Aston Villa last Saturday.

Nelson Oliveira sustained a horrific facial injury against Villa and his absence is a major blow because he looked in good touch after joining on loan from Norwich.

Without him the Royals look toothless in attack and should struggle to halt Wednesday's surge up the table.

A winless January had threatened to derail Birmingham's Championship playoff push but they climbed from 12th to eighth with a 2-0 victory at home to Nottingham Forest last Saturday and can collect another three points at QPR.

Both clubs are performing above expectations and defying the constraints of small squads.

QPR are through to an FA Cup fifth-round tie at home to Watford but their promotion hopes have receded after three successive league defeats.

The Hoops' poor run has coincided with the absences of injured duo Angel Rangel and Geoff Cameron, who have not featured in 2019.

While QPR are stretched, Birmingham look as strong as at any time this season with long-term absentee David Davis back in full training and in contention for a place on the bench.

The Blues take pride in being competitive and tough to beat but they also carry a threat thanks to the blossoming strike partnership of Lukas Jutkiewicz and Che Adams.

The pair have delivered 26 of Birmingham's 45 league goals (ten by Jutkiewicz and 16 from Adams) and either could be a match-winner in London.

Grimsby have climbed into the top half of Sky Bet League Two for the first time since August and they have a decent chance of making it three wins in a row when they take on lowly Yeovil at Huish Park.

The markets favour fourth-bottom Yeovil, who are in desperate need of the points.

But the Glovers have won just two of their 15 home league games this season and are hampered by the absence of highly-rated defender Tom James, who was sent off during a 1-0 loss at Cheltenham on Tuesday.

Yeovil have lost their last three games without scoring a goal and under-pressure manager Darren Way will be hoping for an impact from attacking trio Mihai Dobre, Courtney Duffus and Tristan Abrahams, who arrived on January loan deals from Bournemouth, Oldham and Norwich.

However, Grimsby are strengthened by the returns from suspension of goalkeeper James McKeown and centre-back Harry Davis and will be tough to break down.

Notts County are seven points adrift of safety in League Two but it may be too early to write off their survival hopes.

They secured a well-deserved 1-1 draw at home to leaders Lincoln last Saturday and they could give fourth-placed Forest Green a tough game in Gloucestershire.

Forest Green are playing some excellent football and are contenders for automatic promotion but their odds look short given the recent improvement in Notts County's performances.

The Magpies have drawn their last three matches against top-eight teams and look overpriced to collect at least a point this weekend.