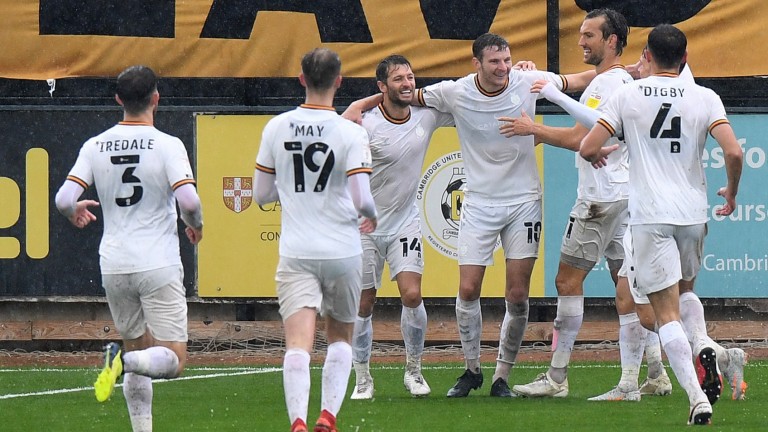 Cambridge are unlikely to have featured on many ante-post League Two shortlists but deserve to be second after five games and look a solid draw no bet wager to topple struggling Scunthorpe at Glanford Park.

A revival in Cambridge's fortunes can be traced back to late January when Mark Bonner took over as caretaker-manager in the aftermath of Colin Calderwood leaving the club.

Bonner made an immediate impact, winning four games in succession, and impressed the club's hierarchy enough to earn a two-year-contract.

It was Bonner's first head coach position but he continues to impress and his side look resilient at the back and decisive in the final third.

Centre-forward Paul Mullin has been one of the main beneficiaries, scoring five goals this season, including a brace in last Saturday's 2-1 success at home to highflying Newport.

Cambridge look equipped to push on and are tough opponents for Scunthorpe, who are hoping to move forward with a younger group of players.

Scunny have been handed some harsh lessons, including a 4-1 loss at home to Forest Green last Saturday, and might have to digest another poor result.

Stoke were putting together a mini-revival before the international break and can extend their unbeaten sequence to five by defeating Luton.

League tables are not always a reliable guide in the early stages of a season and Luton may be one of the Championship's fast starters who struggle to stay in a lofty position.

The Hatters have won three of their opening four games but tougher tests are coming up, starting with Stoke's visit to Kenilworth Road.

Before the international break Luton worked very hard for a 2-0 success at home to lowly Wycombe.

Despite the result, there was not much to choose between the teams and a more difficult challenge awaits this weekend.

On Stoke's last road trip they won 1-0 at Aston Villa in the fourth round of the EFL Cup.

Judging by that effort, they have every chance of beating Luton.

Wimbledon's 22-year exile from their former home is scheduled to end next month with the opening of the new Plough Lane Stadium but they have been playing some decent stuff at their temporary Loftus Road base and look overpriced to defeat Shrewsbury.

Glyn Hodges's side have lost one of four home games this season and are up to tenth in League One following last Saturday's 1-0 success at Swindon.

The Londoners have built a strong squad with the intention of doing themselves justice in a momentous year in the club's history, and should not be too fearful of the Shrews, who are winless after four games.

Shrewsbury have triumphed only once on their travels this year and may have to wait a little longer for their first away win of the season.

Crewe are adjusting nicely to life in League One and can make it three home wins in succession by defeating Blackpool.

There were high pre-season expectations of Blackpool but they have lost four of five league games and face further disappointment at Gresty Road.

Attacking midfielder Adam Phillips has been one of the key players behind Morecambe's stunning start to the League Two season and can add to his three-goal tally with the opener in the Shrimps' away fixture at Crawley.