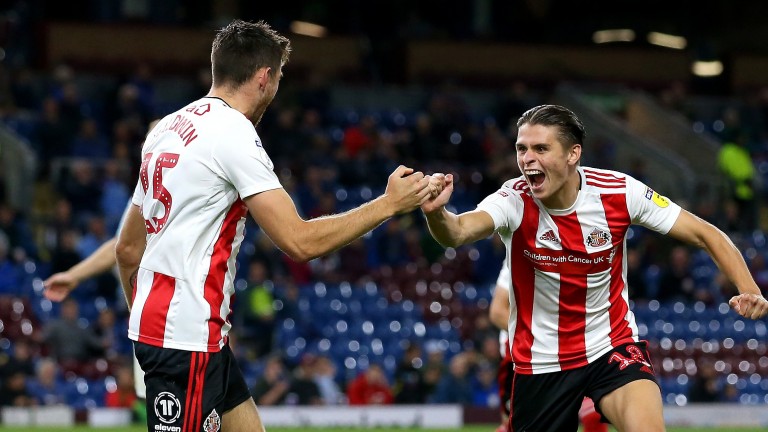 A largely second string Sunderland side were 8-1 winners at home to Aston Villa Under-21 in the EFL Trophy on Tuesday and the Black Cats' first 11 should be too strong for Bristol Rovers in their Sky Bet League One opener.

Sunderland manager Phil Parkinson has made full use of the extended summer by assembling a squad which should challenge for automatic promotion.

And the increased competition should contribute to improved performances from striker Will Grigg and target man Charlie Wyke, who are capable of better than they showed last term.

The defence has been bolstered further by the capture of Australian centre-back Bailey Wright from Bristol City and there is every reason for Sunderland to approach the season with confidence.

They were 14th last term but played more like relegation candidates from the turn of the year – taking nine points from 13 matches.

And there was no sign of improvement last Saturday, when Ben Garner's side lost 3-0 at Ipswich in the EFL Cup first round.

It would seem that Rovers' defensive frailties have not been addressed and the summer sale of striker Jonson Clarke-Harris to Peterborough has removed their only significant goal threat.

A battle against the drop looks on the cards, starting with a defeat at the Stadium of Light.

Cambridge have had to cancel plans to allow 2500 fans to attend this weekend's clash at home to Carlisle but they can shrug off the disappointment by defeating Carlisle.

Adapting to changed circumstances is unlikely to faze Cambridge head coach Mark Bonner, who was appointed as the club's permanent manager on March 9, just two days after the club had played their final match of the campaign.

Bonner had impressed as caretaker-manager, steering United to four wins in seven games, but had to wait almost six months for his first game as permanent boss, which was last Saturday's EFL Cup first round fixture at Birmingham.

Expectations were fairly low before the Birmingham game but Bonner's men triumphed 1-0 over their second-tier hosts, who managed just ten shots – only two of them on target.

On the basis of that effort, Cambridge are shaping up to be a competitive fourth tier side and should not have too many concerns about Carlisle, who exited the EFL Cup with a dismal 3-0 defeat at Oldham.

After the contest Carlisle manager Chris Beech admitted his side had struggled in both penalty boxes and his charges may fail to cope with a well organised Cambridge side.

Stoke were just starting to click when last season drew to a close, taking ten points from the last four games, and they look overpriced to start the 2020-21 campaign with a victory at Millwall.

In normal circumstances, few clubs would relish heading to the Den for their opening league game.

However, Stoke's task should be made easier by the absence of fans and by the possible omission of Millwall's on-loan Tottenham striker Troy Parrott, who has been suffering from a thigh strain.

The Potters will expect a tough game but the spine of their team has been ungraded substantially by the signing of centre-back James Chester, midfielder Jon Obi Mikel and striker Steven Fletcher.

They are looking to compete towards the top end of the table and have every chance of starting with a win.

Last season's League Two suspension came just too soon for Port Vale, who finished one point outside the playoffs, but John Askey's side should continue to improve and look solid favourites to defeat Crawley in the Potteries.

Vale had gone eight games unbeaten before the lockdown and looked in decent nick last weekend while winning 2-1 away to Scunthorpe in the EFL Cup first round.

Crawley were handed a tougher EFL Cup tie at home to Millwall but failed to impress in a 3-1 defeat.

The West Sussex side are still coming to terms with the departure of Beryly Lubala and Ollie Palmer, the club's joint-top scorers last season with 12 league goals, and may need to bring in some fresh recruits to avoid a season of struggle.

Striker Tom Nichols has arrived from Bristol Rovers but has had a tough three years, scoring four goals in 99 league appearances.

Lincoln's Dutch defender Lewis Montsma has settled in quickly since a summer switch from Dordrecht and could be a potential match-winner against Oxford. Montsma is powerful in the air and scored a left-foot volley on his Imps' debut to secure a 2-1 victory at Crewe in the EFL Cup first round.