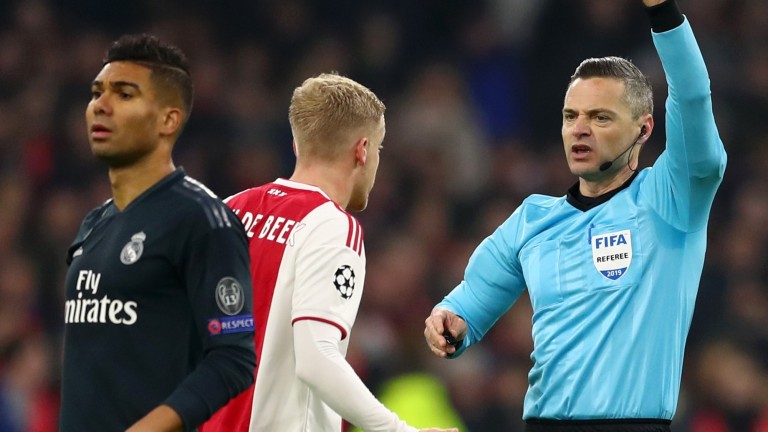 Damir Skomina will referee the Champions League final for the first time after being selected to take charge of Tottenham's clash with Liverpool at the Wanda Metropolitano Stadium on June 1.

The Slovenian was at the centre of a controversial moment when awarding a disputed penalty to Manchester United in the Champions League round of 16 second-leg clash away to Paris St-Germain.

The call, which sealed an away goals success for United, infuriated PSG's Neymar, who was handed a three-game ban after calling the decision 'a disgrace' on social media.

Manchester City celebrated winning the Premier League on Sunday but there is a dark cloud on the horizon with the club facing a one-season ban from the Champions League if they are found guilty of breaking Uefa Financial Fair Play regulations.

The Premier League club were fined £49m in 2014 following a previous breach of regulations and are under the microscope again after reports that they inflated the value of a multi-million pound sponsorship deal.

A decision will be made by Yves Leterme, chairman of the investigatory panel of Uefa's independent financial control board, who is expected to make a recommendation this week.

If Leterme rules against City it is still possible that the sanction of a one-year Champions League ban could be delayed until the following season.

City would have the right to appeal the decision and, if unsuccessful, could take their case to the Court of Arbitration for Sport.