Kansas City Chiefs may not run away from San Francisco 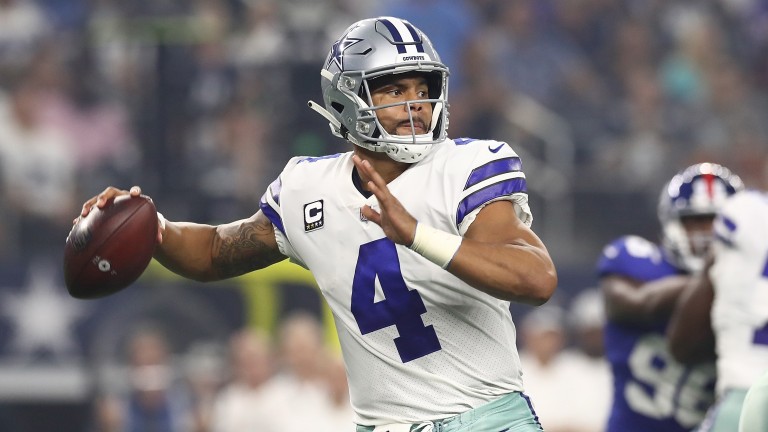 There was a time in the not-too-distant past when a visit to Seattle was one of the most intimidating trips in the NFL.

But while the intense atmosphere remains the same at CenturyLink Field, the Seahawks are not the force they were and Dallas should be confident they can claim their second victory of the season when they head to the Pacific Northwest.

The Cowboys had a disappointing offensive performance at Carolina in their opener but they looked more like the team of old against the Giants with quarterback Dak Prescott and running back Ezekiel Elliott back at full pelt.

Defensively they have been strong and the fact they have chalked up nine sacks in their opening two clashes is bad news for Russell Wilson.

The Seahawks quarterback is a star but he plays behind a poor offensive line and the early-season evidence suggests he is not receiving much protection. He was sacked five times in last week's defeat to Chicago.

Tight end Will Dissley has emerged as a surprise target - he was selected in the fourth round of this year's draft - but it will take a monumental effort from the rookie to maintain his level of contribution.

There just seems more scope for the Cowboys to improve and they are worth backing in receipt of a couple of points.

The Los Angeles Rams and Jacksonville have both demonstrated that pre-season optimism could have been well-founded, but the team who have had the most eye-catching offensive performances have been Kansas City.

Coach Andy Reid put his faith in youth by pushing second-year quarterback Patrick Mahomes into a starting berth and his performances have been startling.

He has thrown ten touchdown passes and no interceptions in victories over the Los Angeles Chargers and Pittsburgh, but the Chiefs may not run away from San Francisco, despite the Niners having lost on their last four visits to Arrowhead.

Kansas City have conceded a total of 65 points in their two games and their dynamic play means they score quickly, so the Niners offence could still get plenty of time on the field.

San Francisco claimed a three-point victory over Detroit last week to chalk up their first win of the season - they lost their opener to Minnesota - and they would have beaten the Lions more comprehensively had they not taken their foot off the gas and allowed the Lions to score two fourth-quarter touchdowns.

A place in the playoffs is a realistic aim for Kyle Shanahan's team and they can stay within the 6.5-point handicap.

Best points bet
Over 43 points in Cincinnati at Carolina

Both Cincinnati and Carolina are having to come to terms with key offensive injuries but a total-points line of 43 for their clash in Charlotte appears to be on the modest side.

The Bengals will be cursing that running back Joe Mixon has been ruled out with a knee injury after an encouraging start to the campaign, but they look stronger on that side of the ball this year.

If quarterback Andy Dalton can avoid mistakes then they can post points against a Panthers defence who conceded 31 points in last week's defeat to Atlanta.

Carolina have perhaps been too reliant on running back Christian McCaffery, who is an excellent receiving option as well, but they still have enough receiving talent to make their mark against a team who have conceded 23 points in each of their opening two matches.

Denver have claimed wins in both of their opening matches but optimism at Mile High may be tempered by the fact that those successes have come against Seattle and Oakland, two teams who look set to struggle.

It looks likely that Baltimore will take the aerial route in trying to get the better of them this week - they are ranked seventh in passing yards and 23rd in rushing - and it would not be a surprise if receiver John Brown features heavily.

Brown scored touchdowns in both of the Ravens' games against Buffalo and Cincinnati and he can build on the excellent start he has made since heading to Maryland from Arizona.

FIRST PUBLISHED 8:00PM, SEP 22 2018
John Brown scored touchdowns in both of the Ravens' games against Buffalo and Cincinnati and he can build on the excellent start he has made