Dak Prescott could help Dallas Cowboys to get over the line

Best bets for the second of Saturday's NFL playoffs 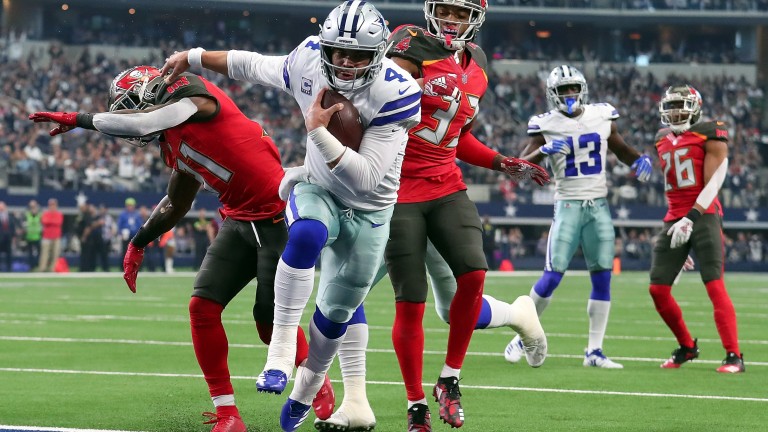 Defences may end up on top in the second of Saturday's NFL playoff offerings as both Seattle and Dallas have work to do to convince that they will be able to match the scoring potential of their NFC rivals a little further along the line.

The Seahawks and the Cowboys are likely to adopt a run-heavy attack, even though Dallas quarterback Dak Prescott has enjoyed a decent relationship with Amari Cooper after the former Raiders receiver arrived in Texas.

The league's most potent rusher Ezekiel Elliott is still likely to be burdened with most of the donkey work while the Seahawks will need their offensive line to at least allow quarterback Russell Wilson the opportunity to lead them to victory.

So there is a decent chance that the game could turn into a grind, even though Seattle have not failed to score at least 20 points since their 25-17 defeat at home to the Los Angeles Chargers in Week Nine.

The only match the Cowboys have lost since Week Nine was a 23-0 defeat to Indianapolis and they have been strong at AT&T Stadium.

Prescott continues to emerge as a talisman and has scored six touchdowns in each of the three seasons he has been leading the Dallas charge.

The last of those came against Tampa Bay a fortnight ago and Prescott looks attractively priced to be a threat when Dallas get close to the Seahawks' line.

Key stat
Dallas have won seven of their eight home matches this season.