Froome seeking to stamp his authority on Vuelta in time trial

Route at the mercy of TT specialists 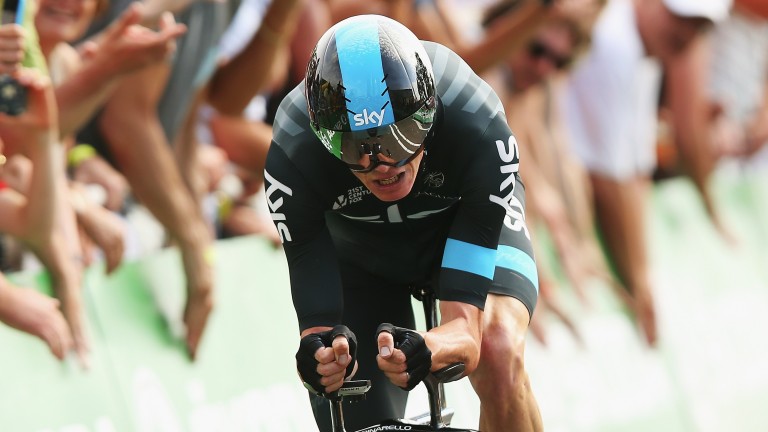 Chris Froome is aiming to extend his lead in the general classification
Bryn Lennon
1 of 1
By Matthew Ireland UPDATED 8:54PM, SEP 4 2017

Froome holds a 61-second advantage over nearest challenger Vincenzo Nibali heading into the final week of the year's last Grand Tour and he will be looking to extend that lead in Tuesday's 40.2km time trial.

Only Rohan Dennis is ahead of the Briton in the stage betting and given the dearth of time-trial specialists in the field, bookmakers clearly think it is a case of the Australian versus the rest.

With little in the way of elevation, the route is at the mercy of the real powerhouses against the clock such as Dennis and Froome, but quotes of 4-9 and 5-2 respectively about them winning a Grand Tour stage after two weeks of hard racing are extremely short.

Had bookmakers been offering each-way terms - they all go win only on stage 16 - then Bob Jungels would be an underrated 28-1 shot.

The Luxembourg rider is sure to be a Grand Tour winner in his own right in time and is already a three-time national time-trial champion and won the young riders classification at the last two editions of the Giro d'Italia.

Jungels would merit serious interest should a top-three finish market be priced up before the first rider leaves the ramp at 12.32pm.

Elia Viviani is the new leader of the Tour of Britain after taking victory on stage two in controversial circumstances. Edvald Boasson Hagen crossed the line first in Blyth but was judged to have impeded the Italian on the run-in and was later relegated by the race jury.

Stage three (live on ITV4, 10.45am Tuesday) sees the riders take on a hilly 177km course from Normanby Hall Country Park to Scunthorpe.