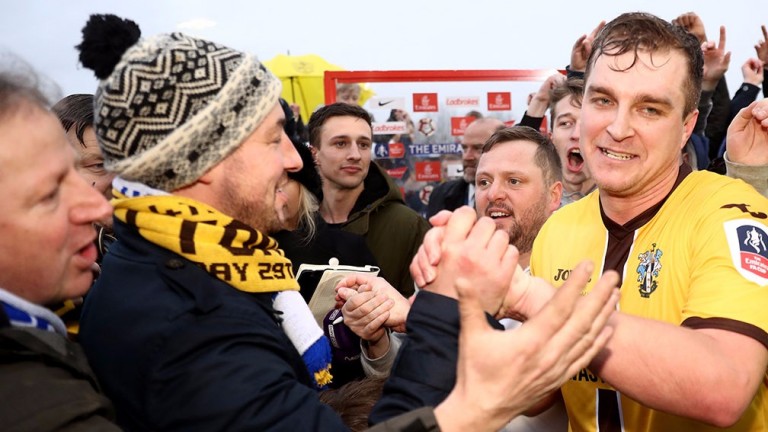 Jamie Collins celebrates with Sutton fans after their win over Leeds
Getty Images
1 of 1
By James Milton 10:48PM, JAN 30 2017

Sutton United, who beat Leeds in the FA Cup fourth round on Sunday, will host Arsenal in the fifth round and Ladbrokes make the National League side 10-1 to knock out the Gunners.

Arsenal were cut from 11-2 to 5-1 after being paired with the lowest-ranked side in the cup while the other Premier League big guns were all drawn away to Sky Bet Championship clubs.

Chelsea, who travel to Liverpool’s conquerors Wolves, are 7-2 to win the trophy and the league leaders are joint-favourites with Manchester City, who head to Huddersfield.

Manchester United, drawn away to Blackburn, are 9-2 for the cup and Tottenham, who face a London derby against Fulham, are 6-1 shots. It’s 20-1 bar the top five in the betting.

Lincoln, the other National League team still in the cup, travel to top-flight Burnley and the Imps are 200-1 with Sky Bet to reach the final at Wembley. Ladbrokes go 5-2 that either Lincoln or Sutton reach the quarter-finals.

Oxford United earned a trip to Middlesbrough and Millwall host the winners of the replay between Derby and Leicester.

Hills go 12-1 about a team below the Premier League winning the cup.

Liverpool were knocked out of two cup competitions last week after home defeats to Southampton and Wolves and bet365 make the Reds 20-1 to lose their next three games at Anfield.

A tough run of fixtures sees Jurgen Klopp’s side host Chelsea this evening, Tottenham on February 11 and Arsenal on March 4 and bet365 go 12-1 that they take nine points from those three games.

The firm make league leaders Chelsea 4-1 to win the title by at least ten points.

There could also be some activity off the pitch as the transfer window closes at 11pm and Ladbrokes offer 16-1 that none of the top six – Chelsea, Arsenal, Tottenham, Liverpool, Manchester City and Manchester United – make a deadline-day signing.