Cruising Dustin Johnson goes clear at the top of the leaderboard

Brooks Koepka can continue his charge 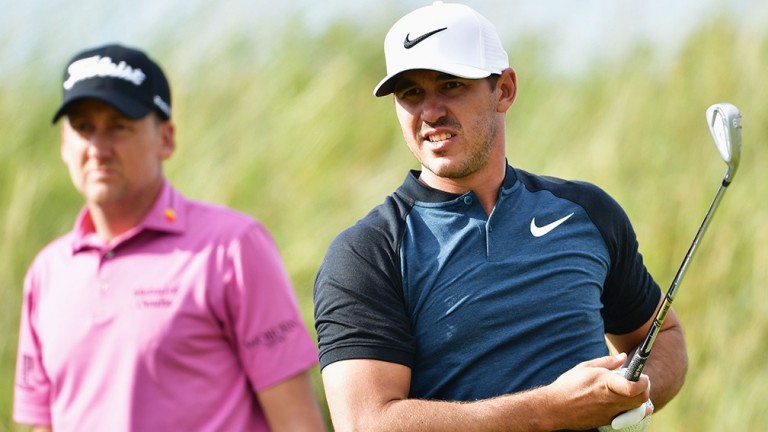 Story so far
Dustin Johnson went odds-on for the US Open after moving four shots clear of the field at the halfway stage of the second Major of the season.

Johnson carded a second-round 67 to take control of proceedings at Shinnecock Hills, New York, on a day when many other elite players were left packing their bags.

Johnson, 8-1 favourite on tournament-eve, is no bigger than 8-11 to claim a second US Open title on Sunday, having made his Major breakthrough in the 2016 edition.

Justin Rose backers endured the agony of him closing with back-to-back bogeys to drop five shots behind, while Ian Poulter signed off with a triple-bogey and a bogey to crash from three under par to one over.

Rose took the bogeys well, remembering how he closed with back-to-back bogeys in round three of the US Open he won in 2013, but the stuffing may have been entirely knocked out of a dejected Poulter.

Johnson is full of confidence, having romped to a six-shot St Jude success last Sunday, and keeping his energy levels and focus up for another 36 holes will be his main challenge. His golf game has clearly come good at a perfect time, but the exertions of last week and the way the mind of the carefree Carolinian can wander, mean the tournament is far from over.

Rose started the final round of the WGC-HSBC Champions in October trailing Johnson by eight shots, and ended up winning the tournament, shooting a 67 as Johnson flopped to a 77. That drama in China will give Rose hope and leave a seed of doubt in the mind of Johnson, but the leader is typically a strong frontrunner.

High-rollers will be eyeing up the 8-11 Johnson, given two days of relatively benign weather – clear with only light breezes – mean he should be able to keep big numbers off his scorecard. But there is enough quality in the chasing pack to suggest that somebody close enough to the leader will provide a Saturday sizzler to apply some Sunday pressure.

The prime candidates are Rose, Henrik Stenson, Tommy Fleetwood and Brooks Koepka. Rose struck a series of excellent putts in round two which glided fractionally past the cup and could easily have a dangerously low third round in him, while Stenson and Fleetwood are also supreme ball-strikers who are relishing the difficulty of Shinnecock. Koepka played his final 11 holes of round two in six under to rocket himself into contention.

Rose and Stenson could be a particular threat, given they are great friends and playing alongside each other in round three. They could easily inspire each other on to big things.

This is the seventh time in US Open history that someone has led by four shots or more after 36 holes, and only Tom McNamara in 1909 failed to win. Johnson has clearly got a firm grip on events, but the talented pack on one over par can come at him.

Third-round threeball punters are pointed towards Koepka, who found top gear coming home in round two and can use that A-game to defeat Poulter in the 7.37pm match.

In-form Patrick Rodgers, who has suffered a triple in round one and a double in round two, has played some superb golf to share 14th place and looks a value outsider against the short-hitting Brian Harman at 6.20pm.

The final twoball of Johnson and Scott Piercy is due out at 8.10pm UK and Ireland time.