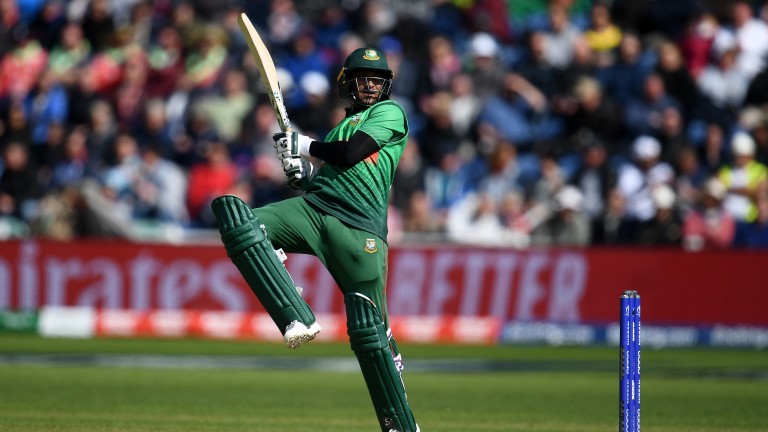 West Indies have won all five completed ICC 50-over tournament meetings with Bangladesh but Jason Holder and his men will not be taking victory for granted when they tussle with the Tigers at Taunton.

Bangladesh stunned South Africa at The Oval in their opening game and then scared New Zealand in a thrilling day-nighter at the Kennington venue, while England did not feel safe despite scoring 386-6 at Cardiff until both Mushfiqur Rahim and Shakib Al Hasan were dismissed.

After beginning their campaign by blitzing Pakistan and worrying Australia at Trent Bridge, the Windies were unfortunate to have their game with the out-of-sorts Proteas washed out but they barely laid a glove on the Three Lions in Southampton on Friday.

Bangladesh have won seven of their nine ODIs against West Indies in the last year and, with the benefit of seven days' rest following the washout of Tuesday's game against Sri Lanka, they look a value bet to stay in the race for a semi-final place with success in Somerset.

The Tigers cosily won all three meetings with the Windies in last month's triangular series in Ireland despite being set seemingly testing targets in a variety of conditions, and their batting and bowling units appear to be functioning more consistently.

Nobody reflects that more in their batting line-up than Shakib Al Hasan and he is worth a wager at 5-4 to reach fifty for a sixth time in his last seven official ODI innings. See if you can grab Ladbrokes' price-boost 2-1.

Shakib's quickfire 121 against England was more about exquisite timing and finding the gaps than thunderous hitting, as were his contributions against South Africa, New Zealand and in Ireland. Last year he hit 97, 56 and 37 against the Windies in the Caribbean and 30 and 65 in Dhaka meetings.

Back Shai Hope to be the top West Indies runscorer. In the last year, he has tamed the Tigers' ODI attack to the tune of three tons and three fifties and also reached three figures against India and Ireland, and also against New Zealand in a World Cup warm-up. Hope did not get going against Pakistan or England but top-scored against Australia with 64.

Bangladesh
Gritty keeper-bat Mushfiqur Rahim was hit on the right hand in the Taunton nets. Slingy quick Rubel Hossain may be brought in.

Seam and swing bowlers have been rewarded with sideways movement when accurate at the County Ground this tournament with standout returns for Jimmy Neesham (5-31) and Mohammad Amir (5-30). The two wickets to fall to spinners in the Afghanistan v New Zealand and Australia v Pakistan matches did not involve turn.

FIRST PUBLISHED 8:00PM, JUN 16 2019
The Tigers won all three meetings with the Windies in last month's tri-series in Ireland cosily despite being set seemingly testing targets